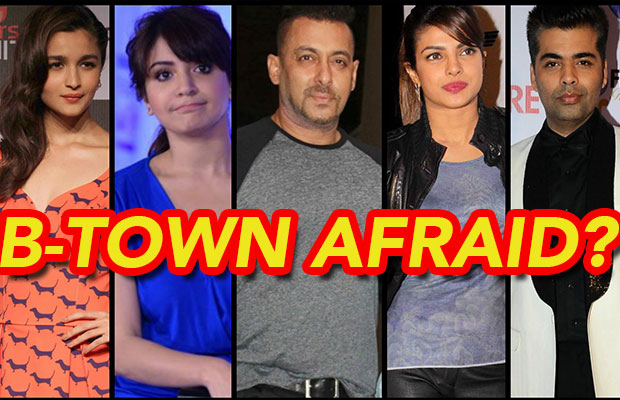 [tps_footer]Salman Khan invited a hassle to himself when he made an insensitive comment lately. The superstar who has a massive fan following is always entangled in some or the other controversy. This time, the Dabangg actor created more haters than ever. Salman irked every fan of his when he said that his training for the film ‘Sultan’ made him feel like a raped woman.

Watch: Salman Khan’s REACTION When Asked If He Would Apologize For ‘Raped Woman’ Remark

The stated comment was widespread amongst the masses. All Bollywood celebrities are known for supporting the female clan. Stars Deepika Padukone, Priyanka Chopra, Anushka Sharma, Raveena Tandon, Karan Johar, Sonakshi Sinha, Alia Bhatt, Parineeti Chopra, Sidharth Malhotra and many others are now and then tweeting on the microblogging site Twitter about women and their empowerment.

All stars gave their viewpoints when it came to Aamir Khan and Shah Rukh Khan’s intolerance debate, but the same celebs are hidden in a shell when it’s Salman Khan in the picture.

Filmmaker Karan Johar who is otherwise too vocal about the female clan is mum on Salman Khan’s ‘Raped Woman’ comment. Salman received loads of hate tweets for his thoughtless statement. The Sultan actor also received an open letter from a gang rape victim.

The only singer Sona Mohapatra voiced her view against the superstar. The singer was wrongly targeted by Salman’s fans and the talent bundle was even threatened with rape. Talent bundles Anurag Kashyap, Lilette Dubey and Apurva Asrani have spoken up. Actress Raveena Tandon who is always giving opinions on Twitter on burning issues also was quiet for Salman’s mistake.

Likewise, Anushka Sharma who is brave enough always when it comes to respecting women was also shut when it came to Salman’s raped woman comment. Veteran actor Rishi Kapoor who is popular for his never ending opinions is nowhere to be seen for Salman Khan’s irresponsible comment.

Young actress Alia Bhatt also ignored the question regarding the raped woman comparison. The starlet did not speak about the same.

Above all, director Subhash Ghai has supported Salman saying that he is a kid at heart! Also, Pooja Bedi was not against the Bajrangi Bhaijaan actor. 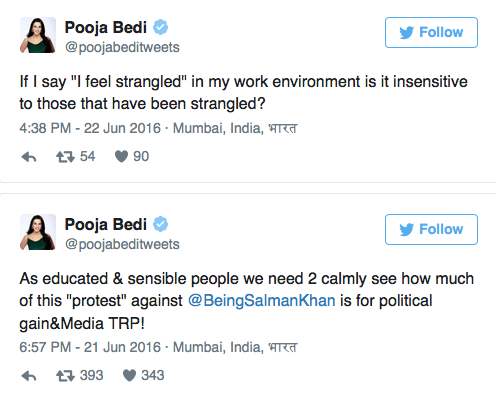 Can we say that our tinsel town celebs are biassed towards Salman Khan’s faults or are they scared for their professional graph, you decide!