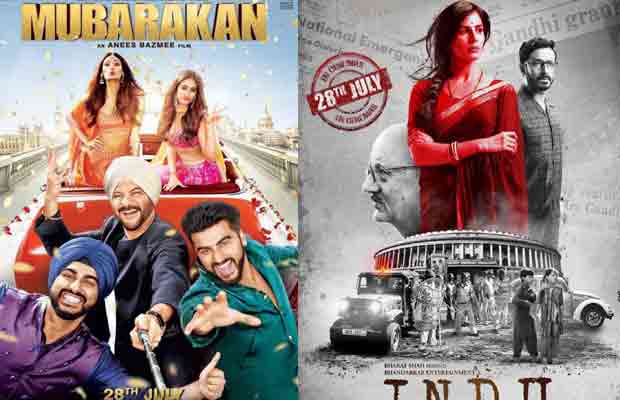 This week, two Bollywood films- Mubarakan and Indu Sarkar have released at the Box Office. While Anil Kapoor, Arjun Kapoor, Athiya Shetty and Ileana D’Cruz starrer Mubarakan is a family entertainer, Madhur Bhandarkar’s Indu Sarkar is meant for serious and hard-hitting cinema lovers. Both the films have a different set of target audience.

Directed by Anees Bazmee, Mubarakan, which is a complete family entertainer, has received a good response from the audience as well as critics. The film has managed to create the much-needed hype before the release but could it receiving a flying start at the Box Office?

Mubarakan has received a low opening of around 15-20% in the morning shows. The film is witnessing a good crowd at multiplexes than single screens, which indicates that the film will chunk good numbers by the end of the day. Mubarakan has to show a good pick up in the evening and night shows in order to sustain at the Box Office for a good one week as next week Shah Rukh Khan starrer Jab Harry Met Sejal releases. Mubarakan has only one week to mint good numbers at the Box Office.

Talking about another release, Madhur Bhandarkar’s Indu Sarkar starring Kirti Kulhari, Neil Nitin Mukesh, Tota Roy Chowdhury and Anupam Kher, has taken a poor start in the morning shows. Indu Sarkar has everything to offer that a serious cinema lover is looking for in the film. The film has been receiving good response from the critics and audience alike, which will further help to grow the business at the Box Office. The film is expected to turn out magical like the last release, Lipstick Under My Burkha.