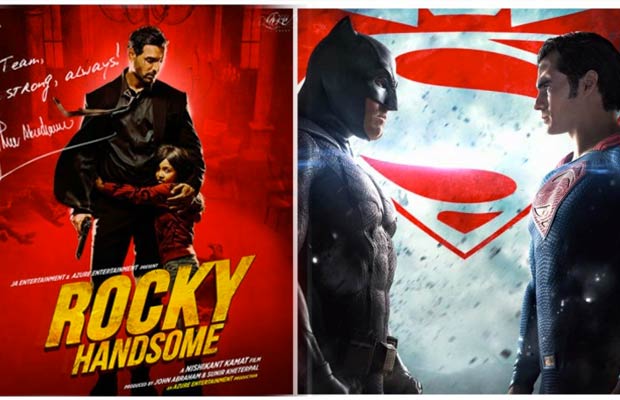 [tps_footer]Two action filled movies ‘Rocky Handsome’ and ‘Batman Vs Superman- Dawn Of Justice’ have hit the theaters together. After the family drama ‘Kapoor & Sons Since 1921′, the year 2016 will see one of its first action oriented films.

John Abraham starrer film ‘Rocky Handsome’ was not much awaited by the masses due to its low promotions. The film which will see John in a fighting mode had limited fans. Moreover, the songs from the film also were not highly popular which led to low recall value. The long weekend may be an advantage for the film nevertheless.

The tough competition from Hollywood film ‘Batman Vs Superman- Dawn Of Justice’ can be a massive hindrance to ‘Rocky Handsome’. The movie ‘Batman Vs Superman’ is eagerly awaited by the fans worldwide. With so many followers of the film, the Hollywood flick is undoubtedly going to be high in collections.

”Batman Vs Superman’ is expected to witness massive collection in the metropolitan cities. The core target audience for the film is the multiplex audience. It can be said that, John starrer film ‘Rocky Handsome’ might fall short of audience.

Made on a massive budget, ‘Batman Vs Superman’ created a worldwide curiosity too with its viral trailers and popularity on the social media. The advance booking of the Hollywood film is already higher than ‘Rocky Handsome’. It is speculated that, the areas where Hollywood movies are watched less, ‘Rocky Handsome’ might make the cut.

The John Abraham starrer can pick up though, if the word of mouth publicity is positive.[/tps_footer]