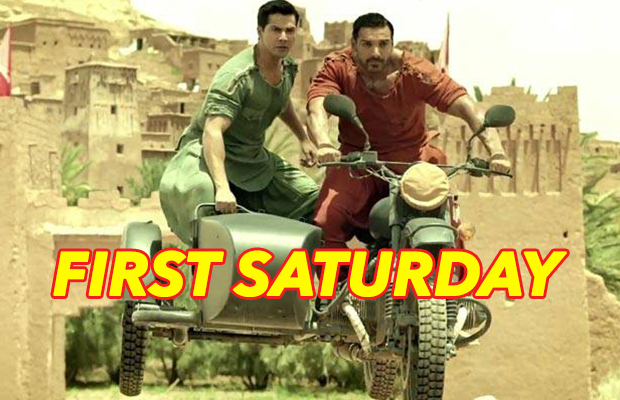 [tps_footer]Rohit Dhawan directorial ‘Dishoom’ has received above average viewers. The film starring Varun Dhawan, John Abraham and Jacqueline Fernandez was much awaited by the young lot. The action-filled flick was up to the mark in its promotions and marketing. ‘Dishoom’ opened on an average note of 30%. The expectations from the film were higher but the reviews were mixed.

Varun Dhawan who has an envious fan following amongst the youth was the crowd puller. The movie opened well in the metropolitan multiplexes. It can be rightly said that ‘Dishoom’ in spite of having a massive recall value had to struggle on Saturday. The Saturday collection for the film was 10% higher than its Friday collections. The opening collection of the film on its first day of release was Rs.11 crore net approx.

Varun, John and Jacqueline’s fan following in the cities also did not help the film in its collections. The film is a concoction of action, comedy, and romance. Lack of word of mouth publicity is also a disadvantage for the film.

‘Dishoom’ released on the fourth week of ‘Sultan’ and even then, the Salman Khan starrer received a good amount of audience. Now whether the Varun–John starrer picks up in the weekdays or no is yet to be seen.