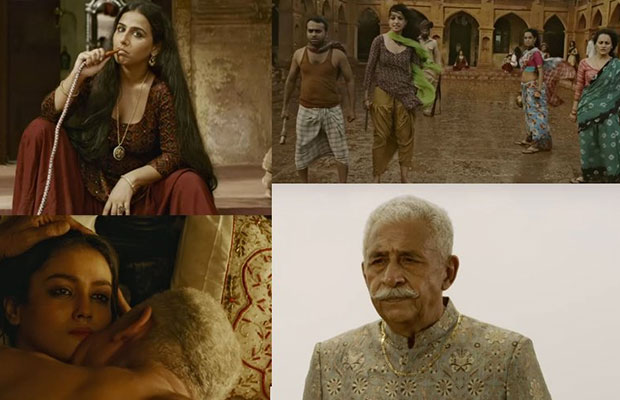 Vidya Balan starrer Begum Jaan has finally released today at the Box Office. The trailer of the multi-starrer film had received an immense response and the same was expected from the film post-release. Begum Jaan, is an adaption of Bengali version, Rajkahini, managed to create the much-needed buzz before the release. Begum Jaan is a multi-starrer film but we also know, Vidya Balan is capable of delivering a hit film on her shoulder. So could Vidya Balan continue the trend with Begum Jaan on its first day?

Srijit Mukherji directorial film has opened to around 15-20% occupancy, which is quite low considering holiday for Good Friday and Ambedkar Jayanti. With the low opening, we wonder if the film could manage average first-day collection at the Box Office. It remains to see if Begum Jaan gets a push in occupancy by evening and night shows. Also, the positive word of mouth publicity can only help the film.

Movie has been royally crashed in North. The Punjabi film Manje Bistre took a bumper opening of 80-85% in Punjab and the same has been witnessed in Delhi. Other than Punjabi film, Hollywood release Fast and Furious 8 has taken over Begum Jaan.

Talking about the film, Film is written and directed by National Film Award-winning director Srijit Mukherji and produced by Mukesh Bhatt, Vishesh Bhatt, and Play Entertainment. The film is based on the backdrop of the year 1947. Begum Janna is the story of eleven women who refuse to part ways with their brothel and each other during the partition between India and Pakistan. The film also stars Chunkey Pandey and Naseeruddin Shah in the lead roles.