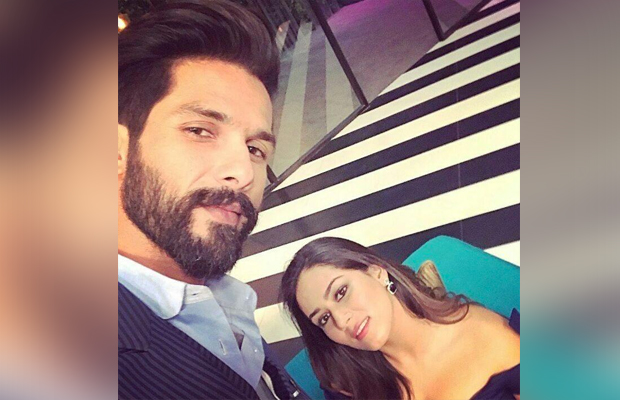 This Koffee with Karan season has seen many firsts and many new combinations bracing the couch. The host Karan Johar has taken his show a notch up and making sure he gets something sensational out from his guests. Amongst the many firsts the show has had and probably will have, as we all know, he has managed to get Shahid Kapoor’s wife, Mira Rajput Kapoor to share the couch with her star husband. They have already shot for it.

The excitement took over social media when Shahid Kapoor shared a selfie with wifey from the sets of Koffee with Karan. This is probably Mira’s debut and finally all the fans will know what kind of person she is. She has never given any interviews even. Remember how that one Instagram video went viral where Mira spoke and people finally could hear her voice? Yes, Shahid fans are that deprived of knowing Mira!!

But now that this Kapoor couple is all set to appear on the show, we are sure Mira is going to spill the beans on their married life and reveal Shahid’s secrets!

According to DNA, Shahid and Mira’s episode will air on January 1st 2017! What a day. The first day of 2017 and we have a treat from Karan Johar!!

Here’s what a source said about this Karan’s placing of episodes – “Though several episodes have been shot Karan wanted the best episodes to be aired in the beginning of the New Year. The episode with Kareena Kapoor Khan and Sonam Kapoor has also turned out to be good. He is yet to take a call on that, but as of now, Shahid and Mira episode is slated for the New Year.”

A source from the sets said that Mrs. Shahid came across as candid and spontaneous on the show. Mira spoke from the heart. She wasn’t guarded or measured in her comments. She is young and bindaas, which reflected in her attitude and conversation.

Now, for all those waiting for Mira’s debut, rejoice!! You have a date where you can not only see the pretty lady but also hear her!!