The Bollywood actress who has shown her versatility in the kind of cinema she is a part of, Deepika Padukone is all set to widen her horizons.

Now the Bajirao Mastani star is all set to make her international red carpet debut as she presents an award at MTV Europe Music Awards on November 6! Yes you read that right! She is gearing up to be a presenter for which she will be traveling to Rotterdam. Popular global stars like Justin Bieber and Beyonce are leading with maximum nominations for the MTV EMA. Let’s see who Deepika presents the awards to.

The Instagram page of the award show as well as Deepika Padukone herself announced her as one of the presenters. Sharing the news with her fans, Deepika wrote on Instagram, “#cantwait #6thNov #mtvema.” 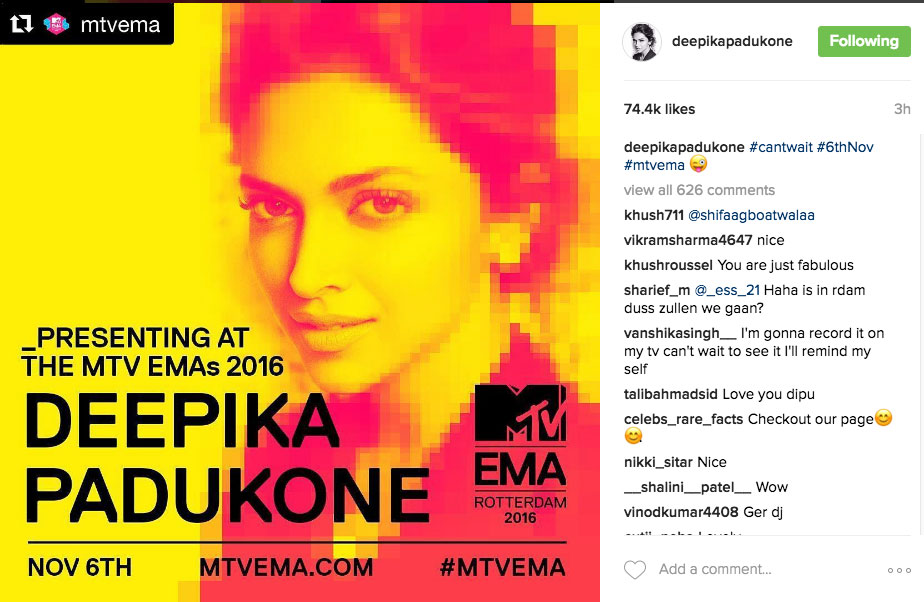 While her contemporary, Priyanka Chopra has already made a lot of international appearances at different events like Oscars and Emmys, this will the first for Deepika. Deepika is already hitting the international tabloids for her big Hollywood debut opposite Vin Diesel in 2017 and is all set to become the next big global star.

The Tamasha actor was earlier chosen among Vanity Fair magazine’s Hollywood’s Next Generation. And it doesn’t end there, she also happens to be among Forbes’ highest paid film actresses in the world!!