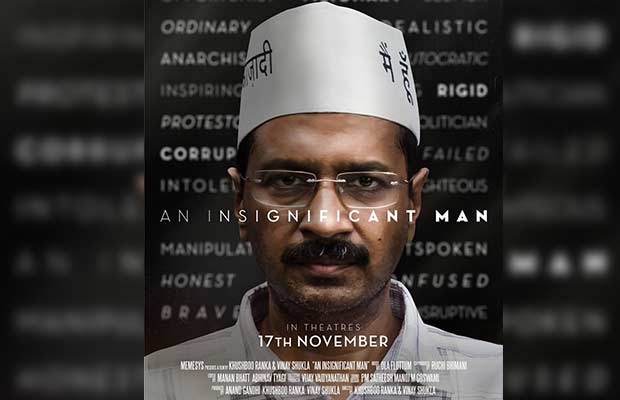 The film which won accolades and awards at over 50 International film festivals across the globe also found the likings of the celebs in B-town.

Soha Ali Khan shared her thoughts on the political thriller saying, “Gripping, entertaining and revealing, #AnInsignificantMan is a very significant film about politics, democracy and one man’s journey from idea to action – see the link for details and watch it this weekend! http://Aimmovie.com  @Memewala”.

Kunal Khemmu also took to Twitter to shower praises for the film saying, “Captivating, exhilarating, thrilling and definitely not an insignificant film. #AnInsignificantMan is a must watch for all. Catch it in theatres on the 17th Nov. http://Aimmovie.com  @Memewala”

The Tumhari Sulu actor Manav Kaul also expressed his thoughts saying, “#AnInsignificantMan is a A very important film!!! It’s a must watch for every Indian!! I loved it! Thank you @Memewala khushbo and Vinay Main pranam karta hoon! Superb !”.

‘An Insignificant Man’ is a non-fiction political thriller that chronicles one of the most important revolutions in contemporary Indian Politics. Based on the rise of Arvind Kejriwal’s insurgent Aam Aadmi Party, the documentary film provides an insider view of the entire political situation at that time.

The film which had been facing censor troubles, provides a thrilling look at the gritty realities of a new political party.

Interestingly, both good and bad perceptions of the AAP are highlighted by the trailer. Taking an unbiased approach, it leaves the viewer to wonder and draw their own conclusions. The lack of interviews and voice-overs give it a cinematic feel, bringing the viewer up, close and personal with democracy.