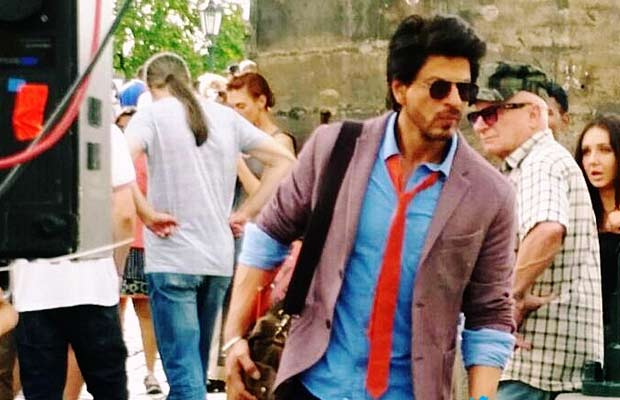 [tps_footer]Shah Rukh Khan is finally shooting for Imtiaz Ali tentatively titled The Ring, opposite Anushka Sharma. The actor has started shooting for its first schedule at Prague. Yesterday, SRK even took to his Instagram to share a video that he is in Prague to shoot for Imtiaz’s film.

Well, the shooting has already commenced. Recently, when King Khan was shooting for a song sequence, his admirers in Prague recognised him and started clicking pictures. The DDLJ actor was shooting on the Charles Bridge for a song by Mohit Chauhan. As soon as SRK takes out a flag out from his bag and waves it around, the citizens in Prague notice him and almost mobs him. Well, no doubt he is known as a global star. The actor has a strong fan base internationally and well, this is a big proof.

Shah Rukh will romance Anushka in the film. This will be their third film together after Rab Ne Bana Di Jodi and Jab Tak Hai Jaan. Anushka is playing a Gujarati chori in the film, whereas SRK is playing a Punjabi tour guide. Also, the film is going to be a complete pack of intense love story. Well, we are eager to see SRK-Anushka rocking the screens with their adorable chemistry.

Apart from this, SRK has another release this year, Gauri Shinde’s Dear Zindagi. The film stars Alia Bhatt in a vital role and will release on November 25. The film will be clashing Vidya Balan’s Kahaani 2. Shah Rukh’s much-awaited Raees will hit the screens on January 26 next year. The film would be clashing Hrithik Roshan’s Kaabil. Well, apparently, Shah Rukh Khan and Imtiaz Ali’s film would also be clashing Akshay Kumar’s film, Crack next year. After completing Imtiaz’s film, SRK will start shooting for Aanand L Rai’s film. He will be playing a dwarf in the film.