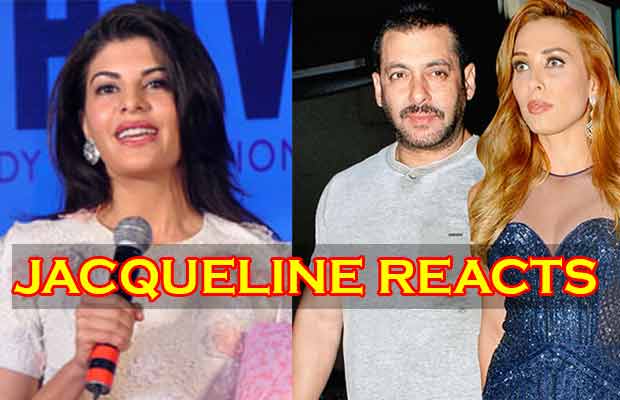 [tps_footer]Bollywood’s bold and beautiful actress Jacqueline Fernandez is a deadly combination of gorgeous looks, killer dance moves, good acting skills and her friendly nature just makes a sweetheart of everyone who ever gets to know the Asli Jacqueline Fernandez. She is enjoying a fantastic acting career in Bollywood and Jackie has already made a place for herself in the A-List actresses of B-Town and she is excited about the release of her upcoming movie Housefull 3 starring Akshay Kumar, Riteish Deshmukh, Lisa Haydon and more. Although Jacqueline is busy promoting Housefull 3 but the questions about Salman Khan-Iulia Vantur marriage plans reached out to her as well and Jacqueline just couldn’t dodge this question and she had to say what she feels about her Kick co-star Salman Khan getting married this December to his alleged Romanian girlfriend Iulia Vantur.

Jacqueline Fernandez played it smart and safe, she couldn’t turn down this question but she gave an answer which barely showed her happiness to see Salman Khan getting married. Here’s what Jacqueline said, “Whatever makes him happy, he should do that.” That’s all! Salman Khan proved to be a very supportive co-star for Jacqueline in Kick and a lot of times Jackie was spotted at Salman‘s home in Galaxy Apartment as we all know Bajrangi Bhaijaan loves partying and seeing his loved ones again and again. He invited Jacqueline for every party at his place and we did see the way Jacqueline maintained her good friendship with Salman even after the shooting of Kick was over.

We hope next time Jacqueline will give a terrific answer for her close friend Salman‘s marriage with Iulia Vantur as it’s reported that we can expect them to get married by this December but we still don’t have any official announcements, yet. There are many females who wouldn’t want to see Salman Khan getting married and losing his most eligible bachelor title but it’s high time Salman Khan should get married, have a loving wife, beautiful kids and a happy family life.[/tps_footer]