Director Ram Gopal Varma surely knows how to stay in the limelight with his controversial tweets. Recently, he made some distasteful comments on Tiger Shroff on his birthday by calling him “bikini babe”. And, he has once again crossed all the limits after making some controversial comments on Sunny Leone. While the whole world was celebrating International Women’s Day, RGV celebrated Happy Men’s Day. The director insulted Sunny Leone and in no time, he garnered the wrath of Twitterati for his nasty tweets. 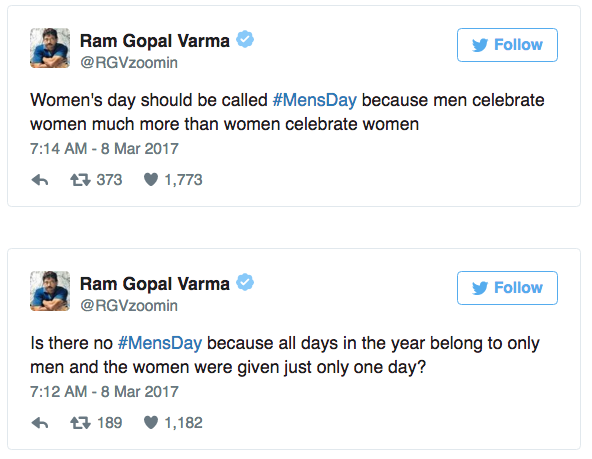 On the occasion of International Women’s Day, he made some nasty tweets. RGV wrote, “I wish all the women in the world give men as much happiness as Sunny Leone gives.”

After receiving backlash from the Twitterati for the above tweet, RGV replied, “The negative noise towards my tweet on @SunnyLeone arises from ultimate hypocrisy. She has more honesty and more self respect than any woman.” 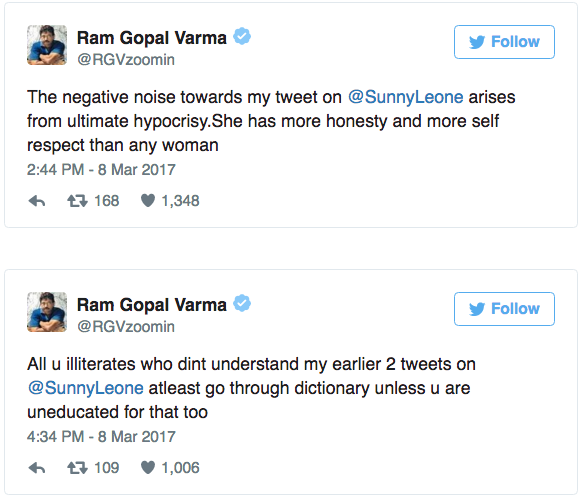 That’s not all, without taking Sunny Leone’s name, he even tweeted, “Like there is a Womens Day is there a Womens Night also???”

However, the Sarkar 3 director said that he will file a ‘counter’ against the activist for disrespecting 18 lakh followers of Sunny Leone.