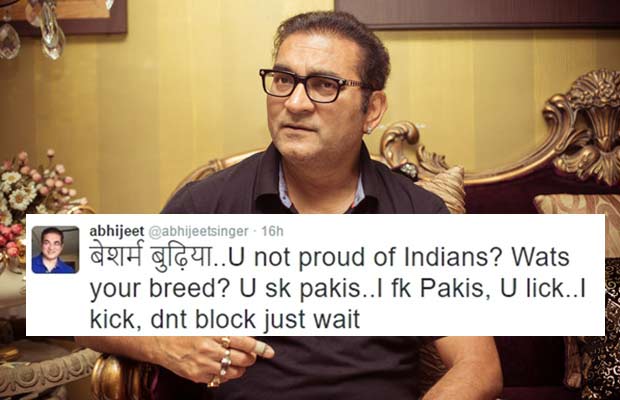 A complaint has been filed against singer Abhijeet Bhattacharya for his ‘abusive’ comments on Twitter allegedly targeting a woman journalist. The complaint was filed against the singer at Vasant Vihar police station after Swati Chaturvedi, a Delhi-based journalist, approached the police.

Abhijeet invited trouble for himself for hurling abuses at a female journalist on Twitter and accused her and stated that the war is not over and he will give a stringent reply in his defence. Abhijeet Bhattacharya further added, that said he was unnecessarily trolled on social media and he was just voicing his opinion with the murder of a techie in Chennai.

These people are anti-national,they can’t scare me with police complaint.I’m sure they will be shown doors by police: Abhijeet Bhattacharya

He stated that the lady is a fake journalist and they do it for publicity and nothing else. He then added, may be she is a famous journalist but who has given them the freedom to attack personally. It is very shameful that you target our country and hail another country.

Further, when questioned about the usage of unparliamentary language, Bhattacharya said that he felt attacked from all quarters and that he had no choice but to come out aggressively in his defence. Bhattacharya took Twitter by storm when one of his tweets – with stark communal overtones – on the murder of the Chennai Infosys techie S Swathi.

Well, Abhijeet should apologise and should have the decency to communicate. Being a star gives you too many power but then you should respect that and use your power in a correct way.

What do you think on this whole issue? Tell us in the comments below.