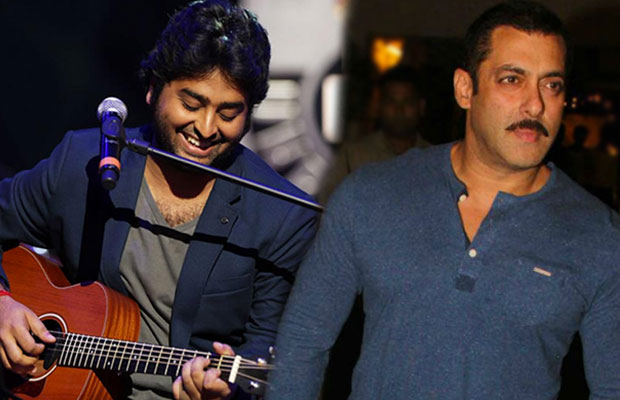 The cold war between singer Arijit Singh and Salman Khan gained all the headlines. The two celebs were at loggerheads with each other. Moreover, their tiff became all the more public when Arijit posted an apology on the social networking site Facebook. The reason for the ill vibe between the two is still not clear but it is said that Singh had offended Salman Khan at an awards function some years ago.

The mind blowing singer then posted an apology on Facebook to calm the matter down. Reports suggested that Salman Khan had decided that Arijit should never sing for him for any film. Their cold war was on very bitter terms as both the celebs swore never to work with each other.

Seems like, the two entities have now buried all the differences and are ready to start afresh. Arijit Singh has confirmed that he will croon for Salman Khan in the film ‘Tubelight’. The singer will be crooning a solo for the Dabangg Khan.

Salman’s upcoming film ‘Tubelight’ is directed by Kabir Khan. The shooting of the film has already started and the masses are already eager for the movie. ‘Tubelight’ stars Chinese actress Zhu Zhu opposite Salman.

Arijit Singh himself confirmed that he will be singing for the superstar, he said, “Yes I am singing for Tubelight. It was recently reported that I said I will never sing for Salman Khan. Who am I to make such arrogant and unwarranted remarks? As far as I am concerned, I am and have always been a Salman Khan fan.”

On commenting about the cold war the singer stated, “It is all in the past now. Shall we move on?”

Well, we are all ears to witness the much-awaited track in ‘Tubelight’!