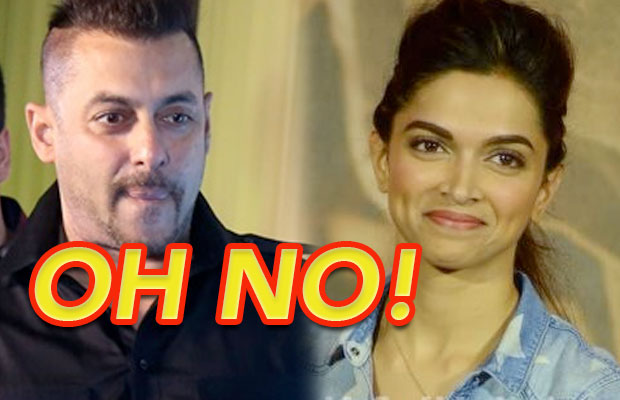 [tps_footer]Salman Khan is one superstar who is extremely moody. The actor is also quite hearty when it comes to his friendships. Salman is known to have a heart of gold but the actor is easily offended too. The Dabangg Khan is now and then in the headlines for his tiff with his B-town counterparts.

Many speculations were rife with the fact that Salman will soon share screen space with Deepika Padukone. Reports also stated that Deepika is looking forward to work with Salman. There were rumors which stated that the two are already locking a project. Nothing of that sort eventually happened. Both Salman and Deepika who are reigning the tinsel town have still not figured out a project together.

It is very much known that Deepika said no to films ‘Kick’ and ‘Sultan’. The Bajrangi Bhaijaan actor who is on the wish list of all actresses is undoubtedly not too pleased with the actress. Seems like, Deepika’s denial to his films has irked Salman.

The Bajirao Mastani actress was recently engrossed in her Hollywood project. The starlet has finally returned to her den and is trying to approach Salman Khan. It is being said that since her arrival, Deepika is trying to fix an appointment with Salman but all her attempts have gone in vain.

It can be well assumed that Salman is in no mood to meet the leggy lass. Currently, the Kick actor is all geared up for his film ‘Sultan’. The movie also stars actress Anushka Sharma.[/tps_footer]