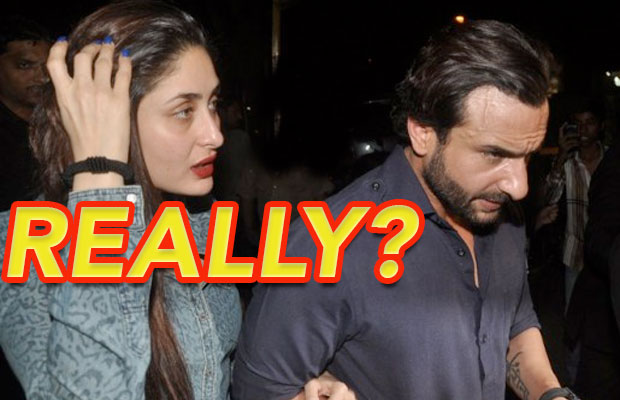 [tps_footer]Kareena Kapoor Khan is one of the most talented actresses of Bollywood. The amazing actress who is happily hitched to actor Saif Ali Khan has confessed something unimaginable. The starlet is currently in the news for her presence in the film ‘Udta Punjab’. The controversial film is not only applauded by the critics but it has also made good business at the box office.

Kareena and Saif have been paired together on screen a couple of times. The Kapoor girl was asked about working with husband Saif in the coming times. The candid actress replied saying that they might not pair up for a while. Further the actress said that maybe after 20 long years they might. The starlet added that no filmmaker has offered them a film together lately.

Kareena Kapoor shared that maybe the filmmakers do not see them as an onscreen couple. The wonderful actress is surely not even very keen on starring with Saif as she shares that she sees him every day.

Well, we hope some filmmaker approaches this adorable duo to star in their project! Kareena Kapoor Khan who is pairing up with new actors was seen with Arjun Kapoor in ‘Ki and Ka’. The gorgeous actress will now be seen in a women centric film with Sonam Kapoor. The movie is titled ‘Veere Di Wedding’. On the other hand, Saif Ali Khan will soon be seen in ‘Rangoon’.[/tps_footer]