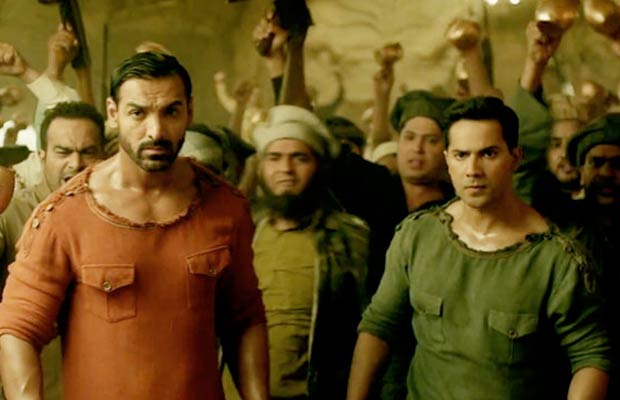 [tps_footer]After the impressive film trailer, ‘Dishoom’ has now unveiled the teaser of the song Sau Tarah Ke. The glimpse is very brief and sees Varun Dhawan and John Abraham in a rock and sturdy image. The trailer of the movie was tricky and thrilling and the track is also going to raise the curiosity levels. ‘Dishoom’ stars actors Varun Dhawan, John Abraham and Jacqueline Fernandez in lead roles.

The first glimpse of the movie was action filled with a hint of plot. Well, when you have two handsome hunks in one movie the glam level is undoubtedly going to be high. ‘Dishoom’ is going to be an action packed film which deals with the kidnapping of a super talented cricketer Viraj. The first song to be unveiled is titled Sau Tarah Ke.

The minute glimpse sees Varun and John making a heroic entry and Jacqueline grooving. The place is nothing less than a gangster’s den with loads of other bad men. Amidst the men, gorgeous actress Jacqueline Fernandez is shaking her leg with the guns.

Well, leaving behind her coy image, Fernandez is surely nailing her hot quotient. The full track will soon be out and the thrilling beats have already made us curious.

‘Dishoom’ is a concoction of action, romance and hints of punch lines. The film is all set to hit the screens on July 29th, 2016.