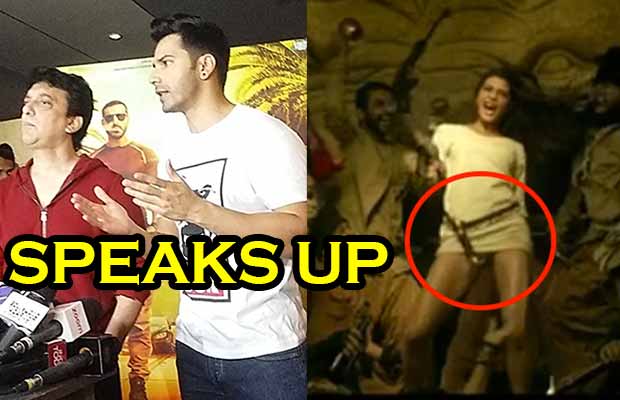 [tps_footer]Varun Dhawan, John Abraham and Jacqueline Fernandez starrer Dishoom is garnering all the limelight since the trailer of the film was released earlier this month. The makers recently launched the teaser of the first song ‘Sau Tarah Ke‘ and soon it created a controversy. The teaser video showed Jacqueline Fernandez in a hot avatar and has a Kirpan around her waist.

This did not go well with the Sikh community as they thought that the makers of the film have mocked the religious symbol of the Kirpan. Manjinder Singh Sirsa, The Gurdwara Management Committee’s general secretary has even written a letter to Pahlaj Nihalani, asking them to remove the song from YouTube. Not only that, they have also demanded an apology from the makers and producers of the film.

Earlier today at the song launch, Varun Dhawan was asked about the same controversy and he reacted saying, “That isn’t a Kirpan. We have shot this song in Morocco. It is an Arabian dagger. My brother and I are Punjabis so we wouldn’t do anything like that.”

Well, we hope this is an end of the controversy and much clear to everyone!

Talking about the film, helmed by Rohit Dhawan, the much-awaited action adventure features Jacqueline Fernandez, Varun Dhawan, and John Abraham in lead roles. This action adventure ride is all set to release on July 29, 2016.[/tps_footer]