The first female superstar of India Sridevi, made her big screen return with a bang after a gap of 15 long years in Gauri Shinde’s English Vinglish. However, the beautiful actress is not an avid social media user. It seems that her daughters Jahnavi Kapoor and Khushi Kapoor are totally poles apart from the actress. Both the daughters are very active users of social media and have never failed to please us with their amazing posts.

It happens once in a blue moon when Sridevi shares pictures with her daughters. When it happens it is a treat to watch the momma-daughter’s adorable pictures. The gorgeous lady, Sridevi recently took to Instagram and posted a picture of herself with her younger daughter Khushi Kapoor. It seems that the 53-year old actress spent a quality time with her daughter. The ageless beauty looks pretty in the picture in a blue outfit with a printed scarf around her neck. On the other hand, Khushi impressed us with her ravishing look in a black outfit with a colourful choker necklace. Both the Mommy-daughter Jodi looked adorable in the picture. 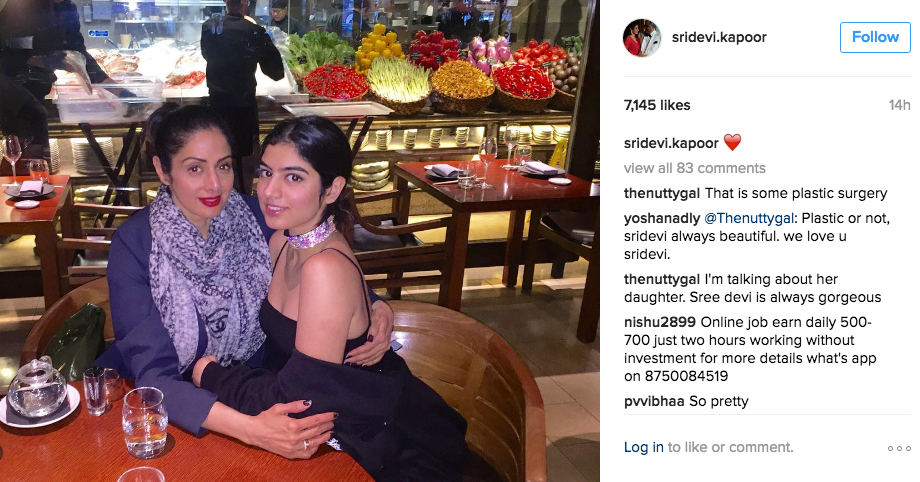 Apart from this, Sridevi‘s elder daughter Jahnavi Kapoor has been in the news for quite a long time now. It is believed that Jahnavi Kapoor is all set to make her entry in Bollywood. Reportedly, Jahnavi has been roped in for Karan Johar’s movie Shiddat which will star Varun Dhawan.