Varun Dhawan and Alia Bhatt started off their Bollywood journey with their debut film Student Of The Year. Both the actors have had a good run in their Bollywood career till now. Varun and Alia share a great bond since their debut film. Both of them were busy promoting a social cause and the duo were recently spotted in Gorakhpur where they inaugurated the Indian Gramin Cricket League (IGCL). The pair had a warm welcome from the locals in the city with a lot of enthusiasm.

Both the actors even took to their Instagram and posted pictures from the event. Alia Bhatt looked gorgeous in a white and black top with denims and sunglasses. Varun Dhawan looked charming as always in a casual T-Shirt and jeans. It seems that amidst a lot of crowd, Varun Dhawan was seen being over-protective towards his co-star Alia Bhatt by holding her close to him. The actor tried to keep her away from the crowd. 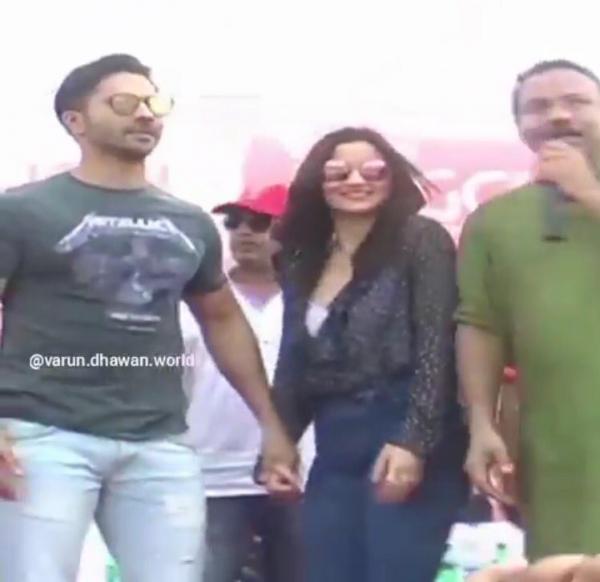 According to the reports, Alia’s rumored beau Sidharth Malhotra is cautious of the closeness shared by both these actors. However, the three stars have always made a point that they are best friends and always will be.

On the work front, Varun Dhawan and Alia Bhatt are busy filming their next film Badrinath Ki Dulhania. The film will bring these two actors on-screen for the third time. Before that Alia Bhatt will be seen in Gauri Shinde’s next film Dear Zindagi which also stars superstar Shah Rukh Khan in an extended cameo. The film is slated to release on November 25, 2016.