Post divorce and break ups, ex-couples are always in a dilemma to stay friends or not. Well, is it really difficult to remain cordial with your ex? Bollywood ex-couples Hrithik Roshan-Sussanne Khan and Arbaaz Khan-Malaika Arora surely believe in ‘let’s be friends’ notion and we think, they are sending out the right message. The recently divorced estranged couple, Malaika and Arbaaz Khan were spotted spending time together with family.

Well, now Malaika Arora has posted a super cute photo of Arbaaz Khan with their son Arhaan and gave it a sweetest caption. She captioned the image as, “Like father like son” This picture is from a recent dinner party where Khan family members Salman Khan, Sohail Khan, brother-in-law Aayush Sharma and others were present. Also present at the party was Malaika’s sister Amrita Arora with her kids and husband.

Well, Malaika Arora and Arbaaz Khan prove that divorces not only lead to a sour ending, but there is more positive to it.

Malaika recently shared a throwback photo with son Arhaan and don’t miss Arbaaz’s reaction to it. She captioned the image, “Precious precious moments…I guess the rains make me all nostalgic #mommy#babyarhaan #throwback” 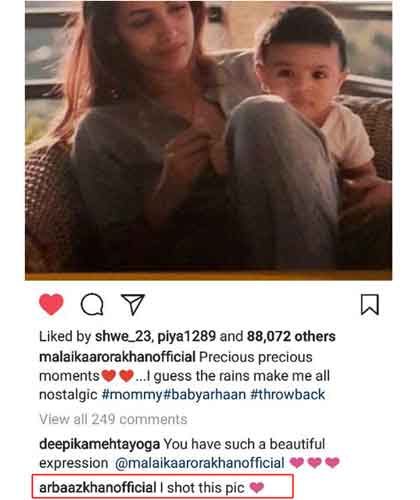 Earlier this year, Arbaaz opened up in an interview with a leading daily and said that there was no chance of them getting back together. He said, ”I guess if that was to happen it would have happened in the first six months, or one year. It didn’t and it’s been almost three years now.”
He added, ”I wouldn’t want to speak for her. I kept my option open despite us parting ways, and I gave it a little time, whether it was a year or two years before I moved on in certain ways. Even as far as dating somebody is concerned.”

Watch Video Guess How Much Did Salman Khan Pay For An Auto Ride To Home!