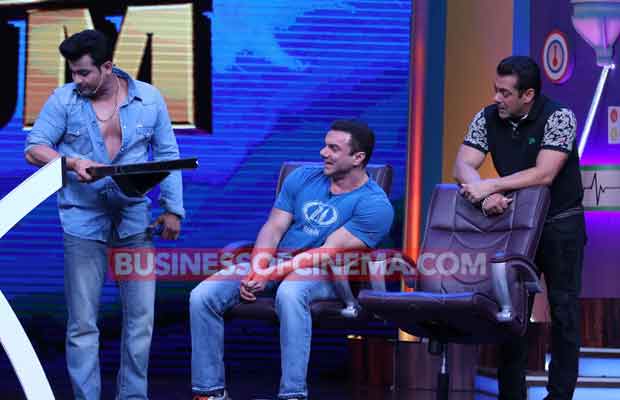 Finally, after the much created hype and a long wait, viewers watched Sunil Grover, Ali Asgar and other former ‘The Kapil Sharma Show’ comedians back together on ‘Super Night With Tubelight’.

The 2-hour special episode witnessed brothers Salman Khan and Sohail Khan together as guests for the promotions of their upcoming film Tubelight. The episode was broadcast last night right after ‘The Kapil Sharma Show’ at 10:30 PM.

Finally, after the much created hype and a long wait, viewers watched Sunil Grover, Ali Asgar and other former ‘The Kapil Sharma Show’

The episode started with Mouni Roy’s sizzling dance performance along with little kids, which was a visual treat for the viewers as well as for the guests Salman and Sohail Khan. As the show proceeded, we saw Sunil Grover back as Dr. Mashoor Gulati with Ali Asgar in the role of a nurse.

Sunil in his old style operated Salman Khan but we could not find anything hilarious about it. It was no different than what we have already seen him doing on ‘The Kapil Sharma Show’. The script was way weak and with major misses on punch lines.

The third sequence of the show was Kaun Banega Crorepati, where Sunil played Amitabh Bachchan (again an act picked from Kapil’s show). This was the most boring part of the episode. It looked like even Salman and Sohail were having a forced laughter. Something fresh was expected from Sunil, considering the strong comedian he is.

Talking about Ali Asgar, he was no different in a female character again. Ali Asgar came dressed as a Chinese girl, which only proved that the writers could have come up with a better script for the talented comedians like them. More than them, the little kids of Sabse Bada Kalakaar were better to make us laugh as they donned the hat of journalists.

The only best part of the show and the worth watching sequence was comedian Sanket Bhosale who mimicked Sanjay Dutt. Smartly, the sequence was set in the last, as the main attraction for the audience to watch the show was Dr. Sanket Bhosale. He got back his ‘Neil Nitin Mukesh’ fumble style, which not even for a single second made us feel as if we have already watched it. It was refreshing to watch him doing the same again but in a better way. Seriously, Sanket as Dutt saved the show.

He even took a dig at Salman asking, “kitne pratishat bhartiyon ko foreign ki ladkian pasand aati hain par milti nahi (what percentage of Indians falls for a foreign girl but fail to impress her).” This was a clear hint at him allegedly dating Romanian beauty, Iulia Vantur.

The episode ended on a musical note as singers Jubin Nautiyal, Nakash Aziz and Amit Mishra sang songs from Tubelight. At the end of the show, Sanket Bhosale revealed that he is coming with his new show and has already invited Salman Khan on it.

Overall, the episode having Sunil Grover, Ali Asgar, Sugandha Mishra, Dr. Sanket Bhosale is worth one time watch and could have been much better.

The last night’s episode only proved that Sunil Grover and Kapil Sharma go hand in hand. If Sunil Grover is the heart, Kapil Sharma is the soul of ‘The Kapil Sharma Show’ and by no means is it a one-man show. Kapil Sharma element was majorly missing on the show. The way he insults and takes a dig at Sunil and Ali Asgar was something that audience might have loved to watch again.

But that’s not happening, sadly.