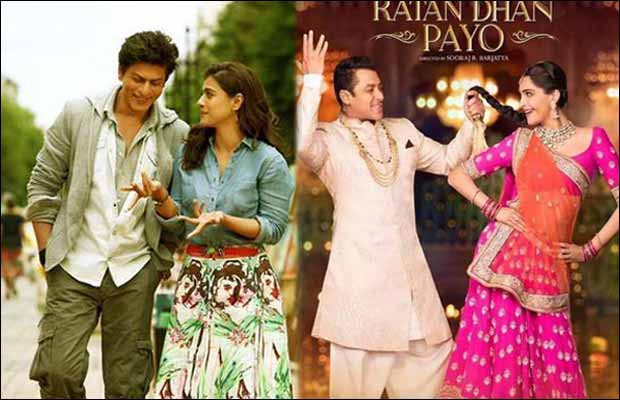 Bollywood actors Shah Rukh Khan and Salman Khan might clash with their movies next year on Eid, but that’s not stopping them to unite for the their latest upcoming films ‘Dilwale’ and ‘Prem Ratan Dhan Payo’ respectively.

As we all know, Salman Khan fans are eagerly waiting to catch his next film ‘Prem Ratan Dhan Payo’ on screens, but Shah Rukh Khan fans are also not behind to catch a glimpse of his much awaited film ‘Dilwale’. Well, surprisingly, SRK as well as Salman Khan’s fans would get a treat together, as ‘Dilwale’ trailer will be attached with ‘Prem Ratan Dhan Payo’ which is releasing on November 12,2015.

It was a surprise treat for the all the fans when the film’s production house declared the news on twitter. Red Chillies Entertainment tweeted, “Dilwale trailer to be attached with Prem Ratan Dhan Payo. #DilwaleTrailerWithPRDP.”

Talking about films, both ‘Dilwale’ and ‘PRDP’ have created a lot of buzz and have been in limelight since its inception!

‘Dilwale’, which brings the eternal jodi of Shah Rukh Khan-Kajol back on screen has already created unprecedented buzz worldwide and now celebrations are just going to increase this festive season. The film stars Varun Dhawan, Kriti Sanon and an amazing ensemble of actors like Vinod Khanna, Boman Irani, Kabir Bedi, Sanjay Mishra and Varun Sharma among others.

On the other hand, Salman Khan will be seen as the quintessential Prem once again in ‘PRDP’ that audiences have loved and treasured in their hearts. The film also features actor Neil Nitin Mukesh, Anupam Kher, Swara Bhaskar and Sonam Kapoor. The film will hit theatres on November 12, 2015. So get set for the firecrackers!