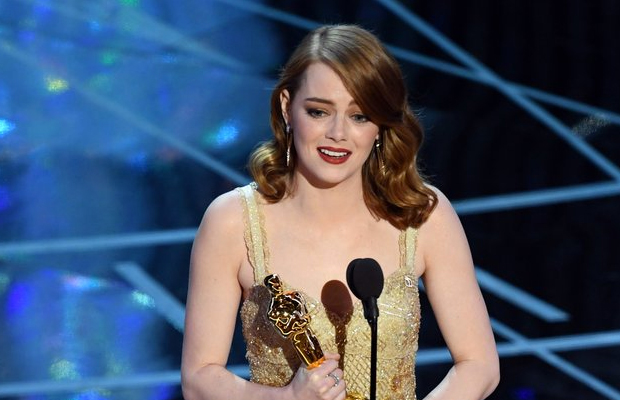 Emma Stone was on cloud nine when she received the Oscar for the Best Actress for her role in ‘La La Land’.

The team of ‘La La Land’ has a momentary taste of success when their film was declared as the Best Film. But it was short-lived as there was an error. ‘La La Land’ was announced instead of ‘Moonlight’ which was the actual winner.

How did it happen? Were there two envelopes? Was it hacked? So many theories.

Here’s what Emma said when she met the journalist backstage, “I f***ing love ‘Moonlight!’ God, I love ‘Moonlight’ so much! I’m so excited for ‘Moonlight.’ It was an amazing thing to hear ‘La La Land’ [was named best picture] and of course we wanted to win. But we’re all so excited for ‘Moonlight.’ I think it’s one of the best films of all time, so I was pretty beside myself.” She added, “I also was holding my best actress in a leading role card [from the envelope] that entire time,” she noted, and while she was extremely excited about Moonlight’s win, she did wonder exactly why the mistake was made.

While everybody has started questioning why there were two cards for one announcement, Variety cleared that Oscars always had this system of printing two cards. They reported that there are always two sets of envelopes at the Academy Awards. “The PriceWaterhouseCoopers accountants bring two briefcases, then stand backstage, one on each side of the stage. They hand the envelopes to the presenters right before they walk out.”

Barry Jenkins, director of Moonlight, spoke to the media present at the event and said that he has not received any kind of explanation for the Best Picture gaffe. The director also said that the last 20 minutes of his life have been insane and we totally agree with it!!

This is indeed insane!