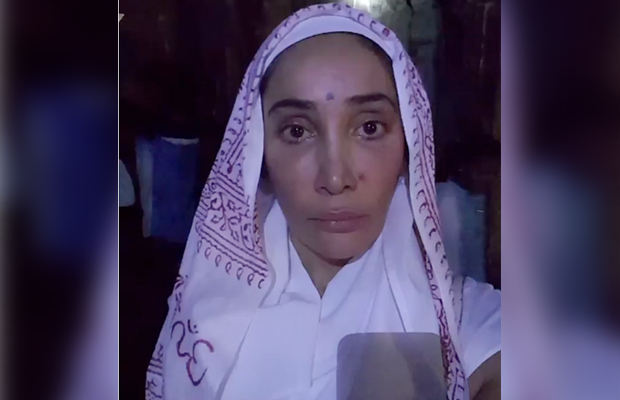 [tps_footer]Sofia Hayat who was known for her controversies in the past is now in the limelight for her nun stint. Sofia who now calls herself Gaia Mother Sofia has made unbelievable statements in the past regarding her transformation. The celebrity expressed earlier that she has taken this decision to become a nun as she wants to find peace.

The celebrity made headlines recently when she claimed that she has removed her breast implants! That’s not all; the lady has crossed all limits now in her beliefs. Sofia now claims that she has given birth to Lord Shiva.

The controversial star Sofia Hayat who is quite active on her social networking accounts posted the same. Sofia on the photo sharing Instagram shared a long post wherein she stated that she has given birth to Lord Shiva. The caption read, “Kailash temple in Aurangabad is so so powerful. I couldn’t breathe. I felt a massive magnetic energy draw my head to the Shiv Lingh. I was shaking for 1hr. I could not lift my head from the Shiv Lingh it was stuck like a magnetic. Something so powerful is happening. Om namah shivaya. My body is changing. Today I know I gave birth to Shiva.”

It further stated, “Today he came back to me and is inside me. I felt scared for such a big powerful change in my body. I am changing back to who I am. The Gods are coming back. The power in me is so great. Shiva is here inside me, I am inside the shiv lingham. It is so powerful I am shaking in my very soul. The time is here. Sacred children.”

“The universe is me..is you you are everything. Om Namah shivaya According to Linga Purana, the lingam is a complete symbolic representation of the formless Universe Bearer – the oval shaped stone is resembling mark of the Universe and bottom base as the Supreme Power holding the entire Universe in it.Similar interpretation is also found in the Skanda Purana: “The endless sky (that great void which contains the entire universe) is the Linga, the Earth is its base.”

“At the end of time the entire universe and all the Gods finally merge in the Linga itself.” In yogic lore, the linga is considered the first form to arise when creation occurs, and also the last form before the dissolution of creation. It is therefore seen as an access to Shiva or that which lies beyond physical creation.”

The stated post received loads of ridiculous comments too. Some even claimed Sofia’s nun act  to be a publicity stunt![/tps_footer]