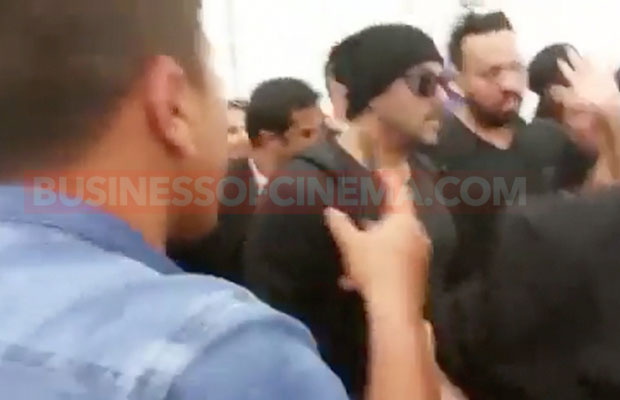 [tps_footer]Undoubtedly, Bollywood actor Salman Khan has a huge fan following across the world. Not only in India, Salman has fans internationally also. The Being Human star’s fans have proved that they can go to any lengths to meet their ‘Sallu bhai’. We have seen many times, his residence in Bandra always sees fans thronging to catch a glimpse of the actor. Or for instance, fans doing weird things to express their love only for their favourite star and why not? Salman has created their stardom at a larger level!

Many fans have crossed international boundaries only to see their favoutire Hero. Don’t believe? Well, here’s our EXCLUSIVE video of Salman Khan right from Madrid, Spain where the actor is attending IIFA 2016 awards. One can see in the video, as soon as Salman got down on the streets of Spain, fans started roaring with only one name, “Salman..Salman…Salman…” Not only that, crazy fans are seen struggling their way only to catch a glimpse of their favourite star, who has currently taken Madrid on the tip of his finger.

Talking about IIFA 2016, the much-awaited awards are finally here. The entire film fraternity has reached for the most prestigious awards. From Deepika Padukone to Priyanka Chopra, Karan Singh Grover, Bipasha Basu, Ameesha Patel, Vivek Oberoi, Shahid Kapoor, Tiger Shroff, Hrithik Roshan and many more will be seen for the star-studded awards night. The 4-day-long extravaganza will comprise events such as IIFA Rocks/MULA Fest, IIFA Stomp and has kicked off from today June 23 and will conclude on June 26.[/tps_footer]