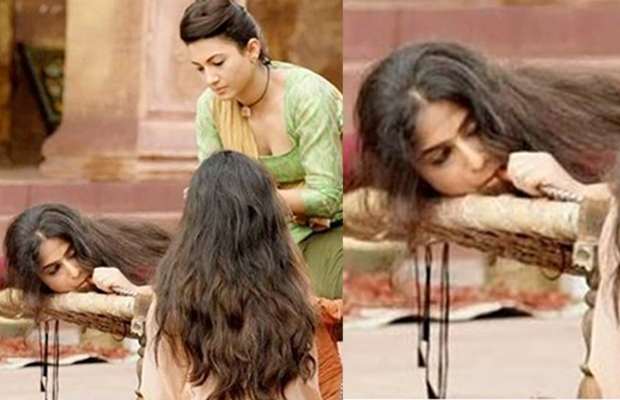 Bollywood actress Vidya Balan, who is known for her unconventional roles, is back with yet another hard-hitting drama, Begum Jaan. Right from Parineeta to her last film Kahaani 2, Vidya Balan’s every role speaks volumes of her versatility. She owns her every character with panache and the best Bollywood has had in a long time.

The actress is now all set for the release of her upcoming film Begum Jaan and is currently on could 9 after the massive response received on the recently released trailer of the film.

In an EXCLUSIVE interview with Business Of Cinema.com Vidya Balan talks about how her challenges, about changing cinema, nepotism in the industry and much more.

Snippets from the interview:

I didn’t think actually but suddenly I am getting to hear from everyone and they liked it, it’s a great feeling. Therefore I say it’s beyond our expectations.

How do you pick your roles?

When I read the script, it has to connect instantly and then I think ki ha iss mein kuch baat hai, matlab muje karni chahiye. Sometimes scripts are very nice with it does not instantly connect and that’s the only think I look for.

How challenging was Begum Jaan, physically and emotionally?

Physically very challenging as it was 45-46 degrees in Jharkhand. It was tough because it would be either like we are burning or it would be raining very heavily. After rains, it would be really very humid. It was very tough shooting and because of the heat, we were trying to optimize our time. We did not take breaks in between and no time-pass used to happen. It was purely work.”

She further added saying, “Now I know I can shoot a film and it is possible to shoot a film in 32 degrees that to a period film with lots of action. But you realize that nothing is impossible. It was very much physically demanding and emotionally too because Begum Jaan is not a regular character. I have not seen a woman like her on or off screen. I enjoyed playing her but it wasn’t easy because she is aggressive, powerful and even if she is not saying anything in the film, she exudes power.

With so many women-centric films, do you think Indian Cinema is changing in terms of Business as well as content?

It is very exciting time for the female actors. We are becoming more and more aware of the fact that we can live our life on our own terms. We have dreams, aspirations, ambition and we are working hard towards it. There are ups and downs, there are struggles, there are triumphs and because of it, there are interesting stories revolving around young girls and women. No longer is a woman only a baby or Dayan (witch). So you have your strengths and weaknesses too. This makes people interested in knowing you. So writers have started borrowing stories from real life women and therefore, their characters are translating well on the screen and audiences want to watch them more. The more success these films see, the more such films are made. So it’s a very good thing.

Adding further if the industry is still lacking somewhere in bringing more women-centric films, Vidya said, “When I did Ishqiya, people told me are you mad? Why are you doing this film but they didn’t realize that I was the surprise package in the film because finally she was playing them (Naseeruddin Siddiqui and Arshad Warsi) and that film did very well. After that, slowly there came ‘No one killed Jessica’, Kahaani, The Dirty Picture, and that time there were no other female-centric films. So you can see in 5 years how much we have grown. This year we are having close to 10 female-centric films, which is great.

On how she deals with such intense characters post shooting?
That’s why I like shooting films outside Bombay because after you come home there is invariable, there is family, there is society, social obligation, then my cook will come and ask me something, all these was not there on the sets in Jharkhand. So it’s very convenient. That’s the only way I can work. I have to cut off myself from everything. Of course, when I come back to my room I am myself, Vidya. I like to speak to my husband, I like to speak to my family but besides that, I like to cut off. Especially there was no network there and after 14 hours of shoot, we had no choice… you could not speak to anyone. It was one and a half hour distance from the hotel to shooting location and after getting tired, I used to sleep. After coming to hotel whatever time I used to get, I used to sleep and speak to loved ones. So there is no scope of getting out of the character in any way.

On dealing with the pressure a day before the release?

I am busy promoting, so it doesn’t affect me (Laughs). I think maybe there is nervousness but am so busy with the shooting and promotions. Last time, I did more than 45 interviews a day before the release of Kahaani 2. I was so busy that I didn’t realize. When I was finished with the work, I was ready to collapse.

Take on censor board?

I can speak from my experience. Of course, we know other films have suffered but it’s incredible to know what they (Censor Board) have done with this film (Begum Jaan). We are very grateful to the censor board and open minded approach to Begum Jaan. I hope they do same with other films also.

Firstly nepotism exists in the world and not only in the industry. You know koi bhi apne logo ke baare mein pehle sochta hai…isme muje koi galat nai lagta…but having said that, I have never experienced anything such…I don’t have anyone from the film Industry but on the basis of merit and on the basis of my belief, I have come so far. But her (Kangana Ranaut) experience has been different than mine. So it does not mean that because if I didn’t have this experience, it doesn’t exist. My experience has been different and theirs different. Who is to say? I have not experienced anything such.”