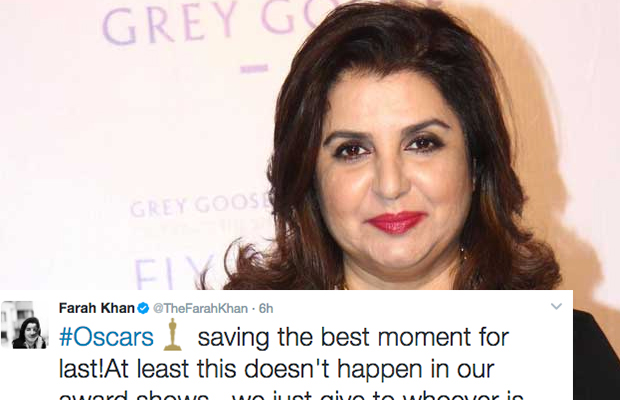 The Oscars ended with a bang on Sunday night with the goof up of declaring a wrong name for the best picture category. Warren Beatty and Faye Dunaway were on stage to announce the award for the best picture. When Beatty opened the envelope on stage, he appeared to either be confused or that he couldn’t exactly read what was written. Dunaway ended up making the ‘La La Land’ announcement. Soon enough it was realized that not ‘La La Land’ but ‘Moonlight’ had won the award. This has not only gotten reactions from the Hollywood fraternity but also from Bollywood.

Director Farah Khan was one of the many B-Town celebs who took to Twitter to talk about the blooper, but she took it to new level. She took the opportunity to take a dig at the Indian award shows. In doing so, she revealed some deep dark secrets.

She first wrote: “#Oscars saving the best moment for last! At least this doesn’t happen in our award shows.. we just give to whoever is still there in audience.”

She took this mishap to highlight the on-goings of the Bollywood award shows that most of it are not based on merits or the cinema quality but are clearly rigged.

She didn’t stop there. She further tweeted: “#Oscars So many standing ovations! in our award shows too people stand up a lot..2 move 2 rows back as seats are added in front continuously.” 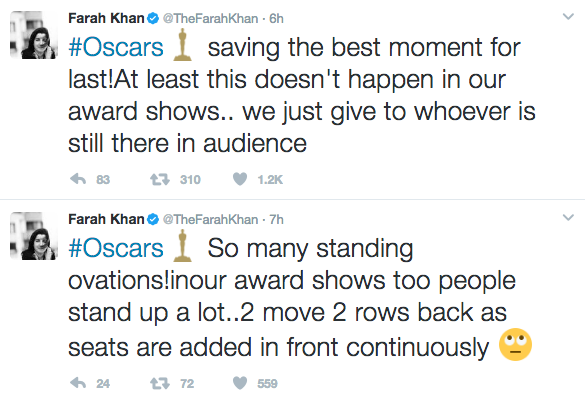 Did she just let out the extremely well-guarded secret of Bollywood award shows??