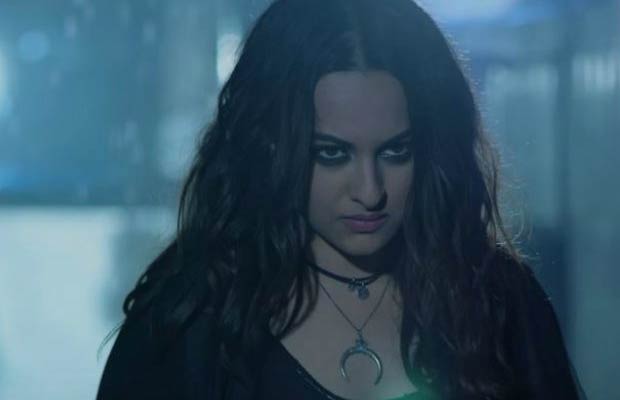 [tps_footer]Sonakshi Sinha starrer Akira is supposed to be her first solo performance and we all are waiting for it. Akira trailer is loved by the audiences and Sonakshi has killed it as we can see in the trailer. Sonakshi Sinha’s performance in Akira will surely increase her fan following.

Sonakshi has crooned for a promotional song of her film Akira. Few days ago the teaser of Rajj Rajj Ke was out and now we bring you the complete song where a fierce Sonakshi Sinha can be seen. Have a look at the video:

Sonakshi Sinha nailed it in this song. She looks super awesome in that black outfit and that accessory. Her voice suits the genre of the song. Sonakshi has a glazed look in her eyes. The song starts with a quote on the side – No one will be forgiven and Sonakshi Sinha with her never seen before avatar. And at the end she smashes a television set with her hockey stick with a saying – Ab Bas! The conclusion just makes us curious as to what Sonakshi will bring up in the film.

Directed by AR Murugadoss, Akira sees Sonakshi’s character coming to Mumbai from Jodhpur, where she gets into a tiff with the goons of the college she enrolls in. The story is about her fight to come out of a case, where the college goons, a corrupt cop played by Anurag Kashyap and another played by Konkona Sen Sharma play crucial components.