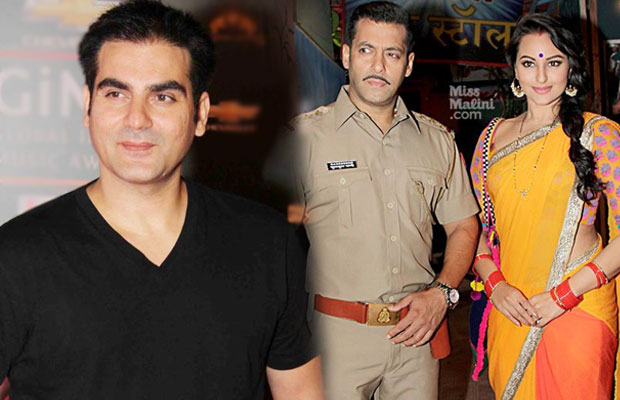 Here comes clarification from the man himself, Arbaaz Khan over Sonakshi Sinha being in Dabangg 3 or no. We all know, Bollywood actress Sonakshi Sinha, made her debut in the industry opposite Salman Khan in Dabangg. Since then the actress has been addressed as the Dabangg girl of B-town. Her role as Rajjo in the film was loved by the audience and so she also went on to star in the film’s sequel, Dabangg 2.

After a successful performance in Dabangg and Dabangg 2, it is said that Sonakshi, who played the role of Robinhood Pandey aka Salman Khan’s wife in the first two films, will not be a part of the film. Speculations were doing rounds that Sonakshi would not be the part as a female lead in the film as makers of Dabangg 3 are keen to approach Parineeti Chopra.

Earlier today at the event, Arbaaz Khan was asked about it. To which he reacted saying, “Sonakshi Sinha is going to be a part of Dabangg 3, in what capacity that is to be seen when the script is ready.”

He also added saying, “Sonakshi Sinha is there in Dabangg3 but there might also be a possibility of another heroine in the film.”

Well, so this makes it clear that Sonakshi Sinha will be seen in Dabangg 3 and we can’t be happy about it. Arbaaz Khan’s venture Dabangg 3 will go on the floors next year after Salman Khan wraps up the shooting of his next with Kabir Khan.

Meanwhile, guess who would be the second actress of Dabangg?