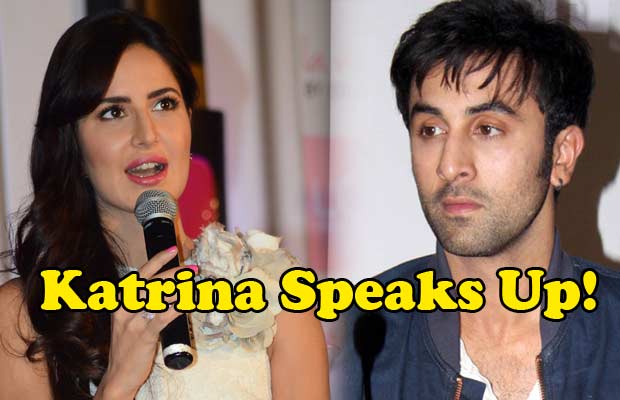 [tps_footer]Katrina Kaif is in a happy phase right now. The actress is receiving immense appreciation for the efforts she has taken in her upcoming film Baar Baar Dekho. Also starring Sidharth Malhotra, Kat looks  gorgeous in the entire trailer.

Well, the journey of making Baar Baar Dekho wasn’t easy for Kat as she had a bad phase at that time in her personal life. She had a break up of her long relationship with Ranbir Kapoor. What led to the breakup is not yet known, but the Phantom actress has kept dignified silence over all the speculations making around her personal life.

Recently, in an interview, Ranbir Kapoor opened up about his breakup and what Kat means to him. Well, in an interview with the media, the lovely actress was asked if it was difficult shooting for the movie Jagga Jasoos, since she was going through a tough time in her personal life, Kat stated, “I think everyone needs to separate personal and professional lives. A lot can be said on this. A lot of people could understand what I would say if I was to say. Having said that, I have taken the decision and I have stood by that, to not talk on this topic. And I feel that is right.”

When Kat was told that Ranbir has finally spoken about it and what she has to say about the same, she added, “You take every moment in life as it comes. Every time someone asks me this question, I understand that it is out of care and concern. I respect that but I still don’t choose to comment. You can dissect the statement but it still remains the same.”

In the film’s trailer, we can see Sid is shown as commitment phobic. When Kat was asked in today’s generation who does she think whether men or women are more commitment-phobic, she says, “I choose to take the stand that it isn’t gender thing but a person thing. I know many women who don’t want to settle down and I also know many men who wouldn’t want to get married. If I have to generalize then I like to believe that women are more inclined towards the family. And towards attachment and protection. Most women are like that. But if you ask me personally, then I would want both (career and marriage).”

There were rumours that Kat was going to sacrifice her career to become Mrs Ranbir Kapoor. Well, when the actress was asked if she will give up her career to the man she loves, Kat replies, “Absolutely, if I want to, yes. Not being forced or coerced, but if I felt then absolutely. And I believe that every woman should follow her instinct.” When Katrina was asked if she in real life is a commitment phobic person, she quips “Am I considered in this generation? If yes then let me tell you I am not commitment phobic.”

Well, Kat finally spoke on many things openly about her personal as well as professional life. The actress is looking quite stunning after her breakup and her appearance in the film looks quite magical. Directed by Nitya Mehra, Baar Baar Dekho releases on September 9.