Breaking the stereotypes of romantic films, Karan Johar’s Dharma Productions has in the past undertaken films like The Lunchbox and Baahubali. Now, it has announced its upcoming film, The Ghazi Attack.

In an attempt to show the valor of our unsung Indian Navy, Karan Johar couldn’t have selected a more befitting day for announcing this film which brings forth the bravery of the men who sail on the high seas.

With a poster of the film posted on Dharma Productions Twitter handle, the caption read, “Presenting The Ghazi Attack – The war you did not know about. Releasing on 17th February 2017 #TheGhaziAttack @karanjohar @RanaDaggubati” 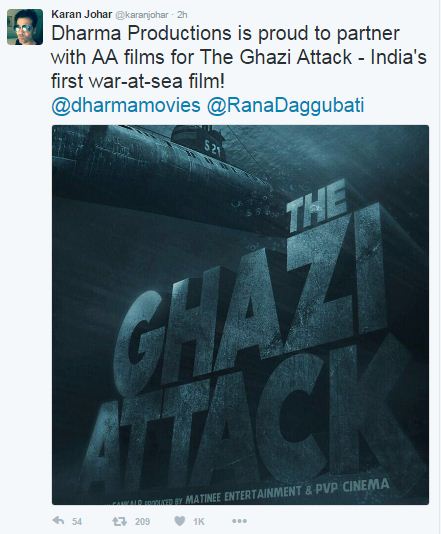 Along with Dharma, The Ghazi Attack is in association with AA Films, Matinee Entertainment and PVP Cinema.

Ghazi stars Rana Daggubati as a Navy officer and Taapsee Pannu as a refugee. The film is made in Telugu and Hindi and will be dubbed in Tamil too.

Association of Karan Johar and Rana is a long one. When the Dum Maaro Dum star showed the first rushes of Baahubali to Karan, the filmmaker immediately noticed the potential of the project and got associated with it. Rana had also done a memorable cameo in Karan’s Yeh Jawaani Hai Deewani as a stunning photographer.

The tale of The Ghazi Attack talks about the valiant Navy officers who stayed underwater for 18 days. It is directed by debutant director Sankalp. It is based on his own novel, Blue Fish. Ghazi also has Kay Kay Menon, Atul Kulkarni and Akshay Mittal.

The poster has gotten our complete interest, what about yours?