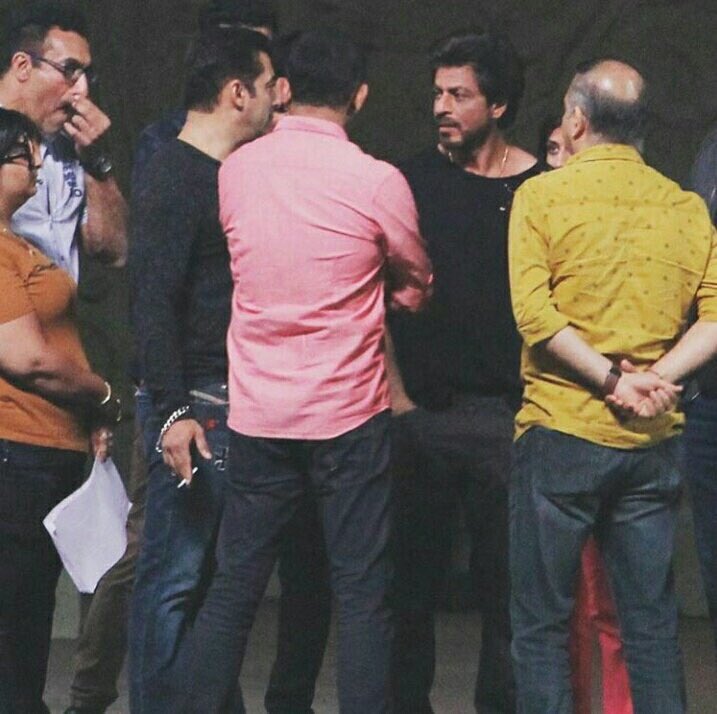 The two can be termed as the hottest duo in Bollywood. No it’s not an actor and an actress; it is Shah Rukh Khan and Salman Khan. The two are a much-discussed topic in B-Town – their fall-out, their patch-up, appearing on television shows, being spotted a party together, etc. etc.

Recently, the pictures of SRK outside Salman‘s home as they were seen greeting and hugging each other, went viral. The next day, in a unique revealing of the first look of the film, it was Salman who shared the poster of Shah Rukh’s next also starring Anushka Sharma on his social media account.

When both of them are talk of the town, the two surely know how to keep the buzz going. It’s a possibility that SRK-Sallu will be seen co-hosting an awards show this year and this surely will be the biggest highlight of the award season this year. The two sharing any kinda space makes the audience go crazy!!

Last night, Salman visited Shah Rukh on the sets where SRK was winding up shooting for some portions of his upcoming Republic Day release, Raees. It was a once-in-a-lifetime kinda moment for some fans when they got to be in the same frame as both the Khans and sometimes in was right in between the two!!

What a moment, isn’t it?