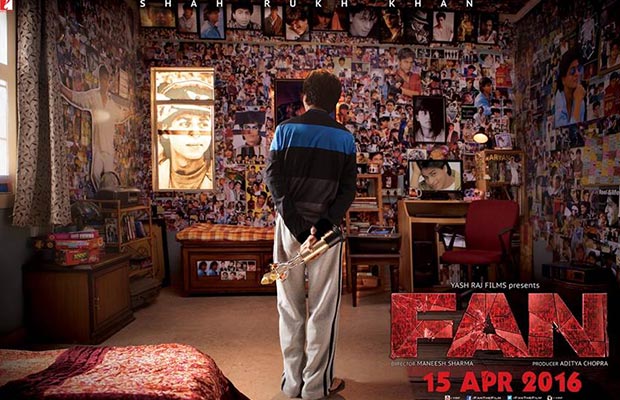 In recent times, Yash Raj Films’ has been teasing the audience with big announcements. This time around, YRF is teasing their audience once again. But with a much bigger film. Shah Rukh Khan’s ‘Fan’.

The look of Gaurav, a character played by SRK, who plays his own FAN, was revealed. There’s no star without a fan, there’s no fan without a star. Meet SRK’s ‘Sabse Bada Fan’.

There’s no star without a fan, there’s no fan without a star. Here comes the SABSE BADA #FAN himself- GAURAV! pic.twitter.com/m883tjyECv

Shah Rukh Khan is playing two characters in the movie. One as himself and one as his biggest fan. The look shows SRK’s fan Gaurav standing in front of a wall that is filled with Shah Rukh Khan’s posters. He is the biggest fan of SRK and worships him. We are excited to see how Gaurav ends up meeting his ideal, Shah Rukh Khan.

To increase the curiosity of the audience, especially fans of SRK, the banner has worked out a different marketing strategy for the film. Last week, the logo of the movie was revealed. The logo is made from thousands of pictures of Shah Rukh’s real life fans. That was one way to show how grateful he has been to have his fans in his life.

After receiving great response for the first teaser, YRF will be releasing the second teaser on Shah Rukh Khan’s 50th Birthday i.e., November 2, 2015. Fans are eagerly waiting for the teaser.

‘Fan’ is set to release on April 15,2016. SRK’s love interest in the movie is model, Waluscha De Sousa. The movie is directed by Maneesh Sharma. What’s your take on the new poster of SRK‘s ‘Fan’?