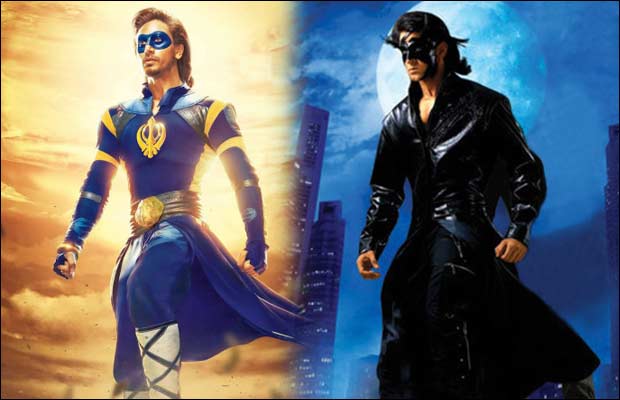 Heropanti actor Tiger Shroff will be seen in choreographer turned filmmaker Remo Dsouza’s next flick ‘A Flying Jatt’ as a slick superhero. The movie reportedly stars Jacqueline Fernandez as the female lead and is produced by Balaji Motion Pictures’ Shobha and Ekta Kapoor. Tiger’s look in ‘A Flying Jatt’ was kept under wraps. The release of the movie has not been finalized yet.

Tiger is seen wearing a blue superhero suit with a mask. The poster’s tagline says ‘Hope Has A New Name’ which means that Tiger’s character will be an invincible saviour of the world.

Tiger’s superhero outfit is very similar to that of Hrithik Roshan’s ‘Krrish’. Hrithik’s superhero outfit is completely black with a mask and cape. ‘Krrish’ could fly and from title of the movie we can say Tiger’s character would be flying too. Only difference would be that Tiger will have a turban as he is playing a Sikh character.

Tiger said in an interview that doing the stunts on cable wires was really hard. He understood how much strength was needed to do wired stunts. Tiger considers Hrithik Roshan as one of his role model. He said that hats off to him for doing so many stunts in Krrish.

The movie name was changed from ‘A Flying Sikh’ to ‘A Flying Jatt’ as Milkha Singh is named ‘A Flying Singh’ which would have created problems.

Tiger Shroff made his debut in Heropanti last year. The movie gave Tiger much attention because of his incredible dancing skills and stunts. Currently, Tiger is working on his next movie ‘Baaghi’ opposite Shraddha Kapoor. Heropanti director Sabbir Khan is directing ‘Baaghi’.

With the superhero movies like ‘Krrish’, ‘RA-One’, do you think ‘A Flying Jatt’ will be good enough? What do you think of Tiger’s new look?