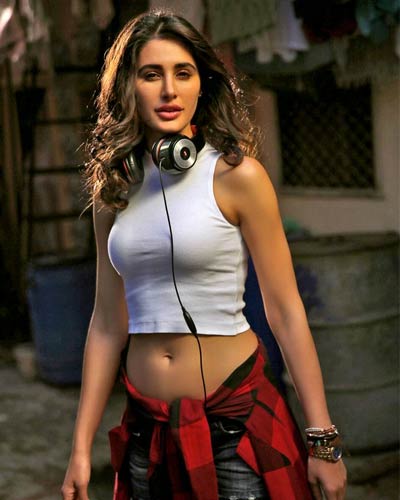 [tps_footer]Last month we got the reports of Ek Villain movie’s terrific actor Riteish Deshmukh signing another movie called Banjo, where he will play a trained drummer and in recent pics with his son, we got to spot his new look for this movie.

Earlier, this is what was reported for Riteish‘s looks in the movie and story by a source, “Riteish Deshmukh has been spotted with hair grown till shoulders these days, which is because of his role in the upcoming film Banjo. The movie, which portrays him as a band member demanded long hair out of the actor. The first look of Riteish has been revealed and the actor looks no less than a trained drummer.”

And now it’s time for the makers to reveal the look of their female lead actor Nargis Fakhri. She has proved her dance skills in hit songs like Yaar Na Mile and Galat Baat Hain but this gorgeous lady still has to prove her acting skills and she is trying to give her best in this flick,

It’s recently reported by a leading portal, “Nargis Fakhri plays a New York-based DJ who comes to Mumbai in ‘Banjo.’ Riteish Deshmukh sporting long tresses in ‘Banjo’ The film marks the debut of Marathi director Ravi Jadhav in Hindi cinema and also stars Riteish Deshmukh in the lead role. This is the first time Nargis and Riteish will share screen space together.”

And here is a brief about the story that we have with us reported by a close source connected to this movie, “The film is a journey, rather than a story. It is a journey in which someone crosses seven seas to meet her dreams. And some reach their hearts to meet themselves. Orchestrated by destiny, a DJ from US meets a Banjo party from Mumbai. They take the leap, they fly, they rise, they stumble, they dust, and they stand again,”

From the looks and storyline, it looks like a promising movie that we can expect a lot. Let’s wait for the trailer and songs to be out and we will share it with you all soon. Keep reading ![/tps_footer]