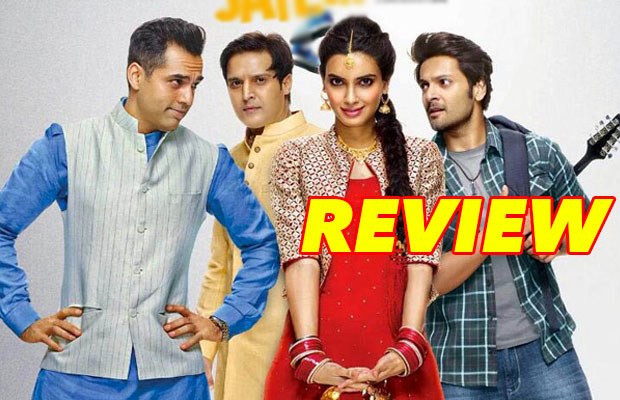 Happy Bhag Jayegi is a low-cal version of Tanu Weds Manu. In other words: smaller star, similar canvas, Jimmy Shergill as the jilted lover/ groom and lots of cheerfulness all around.

The setting is Amritsar. Happy (Diana Penty) is not interested in seeing through the marriage her father has arranged with local corporator Bagga (Shergill). Her planned escape to join her boyfriend Guddu (Ali Fazal) goes awry and she ends up across the border in Lahore, straight into the living room of a high-powered political family headed by Javed Ahmed (Javed Sheikh). Senior is out of the house, so junior, the otherwise docile Bilal (Abhay Deol), is lumbered with this runaway bride who is also an illegal immigrant.

It’s hard to actually comprehend what all the men in her orbit see in Happy that makes her like Madhubala – someone everyone loves, but that matters not; what matters is who she loves. She’s crass, unpredictable, stubborn, and flighty but also a risk-taker and follows her heart. It helps that Penty looks lovely of course, never mind that her performance is hackneyed.

Bilal is torn between duty to his father’s political ambition, and his own impending marriage. In the mix comes this firecracker and she becomes his problem and responsibility. Bilal enlists the help of local cop Afridi (Piyush Mishra who is getting rather repetitive with his performances) to execute a plan to dupe Bagga and bring Guddu to Lahore and reunite him with Happy. Bilal has to do all his while also managing his father, his fiancée Zoya (Momal Sheikh) and Happy’s furious father (Kanwaljeet).

All the chaotic running, chasing, hiding, kidnapping, plotting is bound together by incessant chatter, jokes and contrivances. Writer-director Mudassar Aziz’s film might be named after Happy but it focuses much more on Bilal’s transformation from a wimp into a man of action. Deol carries of the pathani suits and Pakistani nuances with ease. Fazal grows into the role of the good for nothing Guddu with a sincere soul, while Shergill is spot on as the snubbed groom-to-be. Aziz also slips in enough India-Pakistan digs, but to his credit does it without overstating a point or resorting to jingoism.

An inoffensive family entertainer, the film would have benefited from ten minutes being clipped from the length because the one thing you expect from a film called ‘Happy Bhag Jayegi’ is some pace.