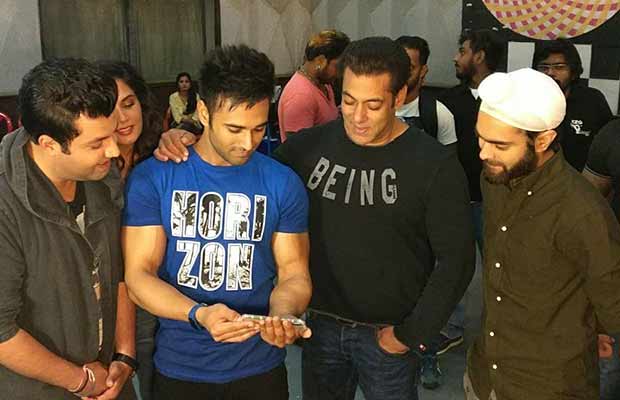 Salman Khan aka Bhai Jaan of Bollywood made an impromptu visit to the ‘Fukrey Returns’ team at Mehboob Studios in Mumbai.

The Superstar Salman Khan not only had a chat with the Fukras but also gave a thumbs up to the upcoming song ‘Tu Mera Bhai Nahi’ from ‘Fukrey Returns’.

Pulkit Samrat, Varun Sharma, Richa Chadha and Manjot Singh were currently busy in promotions of the film, while the Superstar Salman Khan surprised everyone with his impromptu visit at Mehboob studios.

The Fukra gang presented the upcoming song from the comic entertainer to Salman Khan titled ‘Tu Mera Bhai Nahi Hai’ which is an ode to the bromance between two friends.

The story of four Fukras trying to make easy money pleased everyone and when the sequel was announced everyone was naturally delighted. While the audience was curious to witness the story of Hunny, Choocha, Lali and Zafar going forward, the trailer of the film added to the excitement.