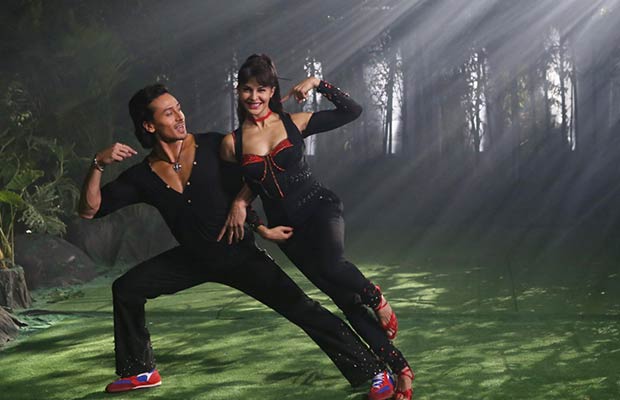 [tps_footer]Flying Jatt starrer Tiger Shroff and Jacqueline Fernandez in the lead roles have already kick started promoting their upcoming film. Produced by Balaji Motion Pictures, the film has released three songs till now – The title track of Flying Jatt, Toota Tara and the latest they released yesterday is a peppy song named – Beat Pe Booty. As the name is, the song sees Jacqueline Fernandez shaking her sexy booty with every beat.

Watch out the video here:

Jacqueline Fernandez and Tiger Shroff both dance so well that even we feel like grooving with them, Don’t you?

Sung by Sachin, Jigar, Vayu and Kanika Kapoor the song is shot in the theme of a jungle, superhot Jacqueline and Tiger’s suave look sizzles the Bootylicious number.

Directed by Remo D’souza, Flying Jatt will see Tiger Shroff as a Superhero romancing with his lady love Jacqueline Fernandez. And he will be battling with a super villain which is played by the famous Nathan Jones. Nathan Jones is said to be a professional wrestler who now turned Hollywood actor. A Flying Jatt is all set to hit the box office on August 25.[/tps_footer]