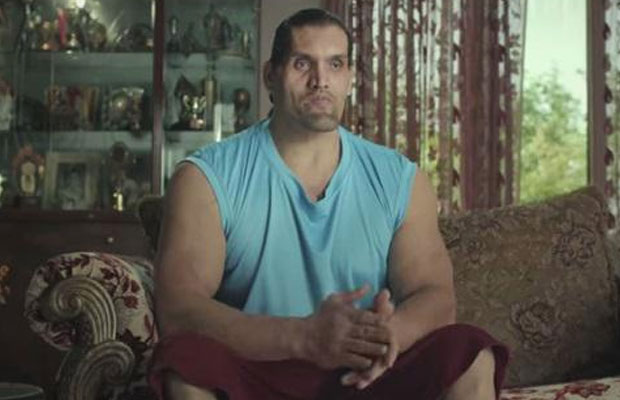 Indian wrestler The Great Khali’s new ad for Ambuja Cement is going viral for all the right reasons! The hilarious ad shows the difficulties faced by him at his hometown, where walls aren’t made of tough cement. The one minute ad has taken the Internet by storm and it is all everyone can seem to share right now. The cute ad shows the WWE champ talking very melodramatically about the problems he faces because of his gigantic body type.

The video shows how whatever he tries to do, Khali ends up damaging the house in some or the other way. May it be playing blindfold game with kids, trying to exercise on the rooftop, banging his head on the wall for support, or leaning on the wall too hard, whatever he tries to do, he falls through the wall because of his strength! Once his house is remade with Ambuja Cement, he can do all the above things without causing any damage.

As he says, his mother always said you’re not different, you’re special Khali! The witty advertisement is surely worth as his dorable role in it will surely make you smile. The best part of the video was when the wrestler was sitting down watching the movie ‘Godzilla‘, and a cute little kid looks at him like he’s the real life Godzilla! Khali who has acted in films like ‘The Longest Yard’, ‘Get Smart’, ‘Kushti‘ is no stranger to the field of acting. Which we can clearly see in the video.

Bobby Pawar, who overlooked the creative direction of the ad states that when they found out that the home in which Khali lives is not built for his strength, they decided to go ahead and do a mockumentary around his life- what it takes to be the Great Khali. Once the idea was cracked, everything fell into place easily. He commended the work done by his team led by Jigar Fernandes and directed by Ayappa.

Watch the ad here and tell us what you think! After getting to see him in Bigg Boss season 4, we wish we could see the WWE star in another Bollywood or Hollywood film soon!