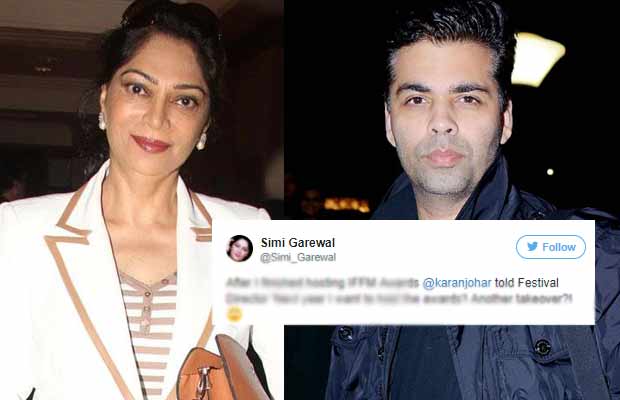 The Indian Film Festival Of Melbourne (IFFM) was held recently and many celebrities attended the event. Actresses Aishwarya Rai Bachchan, Raveena Tandon, Konkana Sen Sharma and Malaika Arora Khan were spotted at the film festival. The film festival was hosted by Simi Garewal.

But with her recent tweet, it looks like she isn’t happy with the change of hosts. Simi Garewal took to twitter stating that Karan Johar is taking over another project from her. She tweeted,“After I finished hosting IFFM Awards @karanjohar told Festival Director ‘Next year I want to host the awards’! Another takeover?!”

After I finished hosting IFFM Awards @karanjohar told Festival Director 'Next year I want to host the awards'! Another takeover?!?

Simi Garewal is clearly angry over the takeover of sorts. It could be the similar talk show idea that Karan Johar came with. The Bollywood producer began his own show titled ‘Koffee With Karan’ which was quite similar to Simi Garewal’s talk show.

Karan Johar was awarded the ‘Leadership in Cinema’ Award at the Indian Film Festival Melbourne 2017. He will also be giving a master class in Melbourne about filmmaking.

Fans of Simi Garewal were upset over the news and took to twitter sharing their thoughts on the matter.

@StarWorldIndia Please create a new talk show for @Simi_Garewal as she has a huge audience demanding her return! ?? RT to bring Simi back!

If this is true and serious. Shame on Karan. You don't have to worry madam.

Yeah simi but koffe was not even close to rendezvous. Coffee mug had no elegance

Don't let it happen ma'am! People really miss your talents as a host/interviewer! I'm glad you're making your sentiments be heard!

Some even used the Nepotism gag for this takeover and called out Karan Johar for it.

Ardent Fans praised the talk show host and complimented her over the success of the show.

Ma'am, you are the best You are unique. So the question of takeover does not arise. Lots of love and respect for your elegance and grace?

U r … you !! Always will b – Rendezvous series is still unsurpassed! ☺️❤️??
Unparalleled !! Nd d range of ur guests- PHENOMENAL !!

But we agree with this user when they said:

May the best host win ?