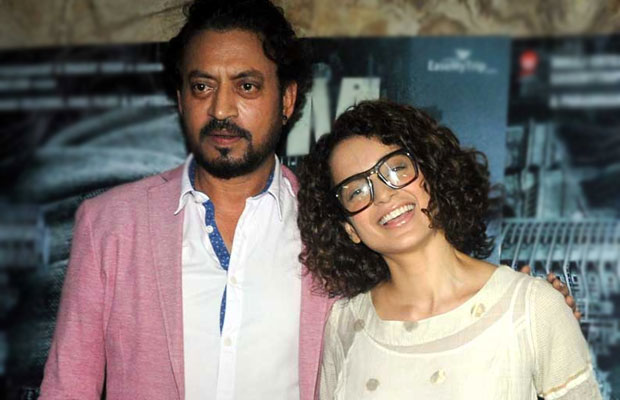 [tps_footer]Bollywood’s two talented stars Kangana Ranaut and Irrfan Khan were very much excited to work with each other in Sai Kabir‘s upcoming film, Divine Lovers. But this could not happen and the film had to go through sudden changes in the cast due to Kangana Ranaut’s date issues. Some reports also suggested that the actress rejected, as she wanted a meatier role in the project. The role then landed up to Zareen Khan’s kitty

Well, there comes another chance for the National Award winners, Kangana and Irrfan Khan to reunite for a film, which will be directed by The Lunchbox director Ritesh Batra.

Lots of rumours were doing rounds that Irrfan Khan and Kangana Ranaut are not so friendly to each other after Kangana made an exit from Divine Lovers. Now this piece of news will put all the rumours to the rest. Putting an end to all those, reportedly, Irrfan and Kangana will pair up again as a married couple for Ritesh Batra’s next. As per reports, the film is based on a husband and wife who get affected by a major real life incident that happened a few years ago.

If reports are to be believed, Kangana is already in love with the script of the film and has given dates to the director for next year. The untitled film will go on floors next year in 2017 and till then, the details of the film are being kept under wraps. Meanwhile, Kangna Ranaut will be wrapping up her much ambitious historic venture Rani Laxmibai.[/tps_footer]