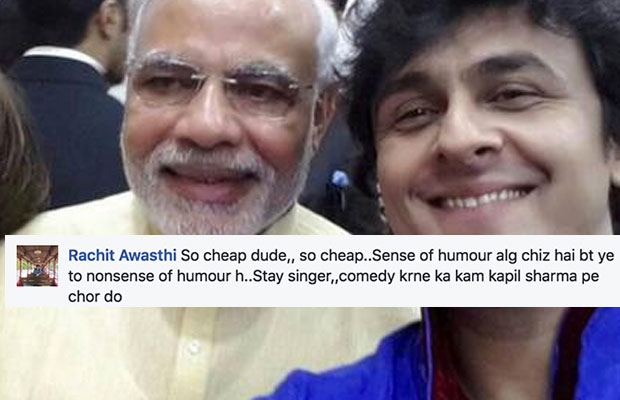 The social media has a great power to reach thousands be it a serious news or an entertaining one. A day ago, there was a video published on YouTube where Sonu Nigam got trolled when a video was created of PM Narendra Modi spoofing a Sonu Nigam song Love is a waste of time. This video was created very intelligently by merging bits of Modi’s speeches.

This video was noticed by Sonu Nigam and you won’t believe he found the video funny. He also shared it on his Facebook page captioning it as “Courtesy Mr. Raju Hirani…One of the funniest ever. Amazing to see Mr. Modi singing my song…Superb”

Some fans of Sonu Nigam were disappointed by his behavior and so they commented this:

No offenses to these troll makers but, people wake up. Its not Sonu Nigam’s fault as he has not created the video. Catch the one who made it. Sonu Nigam is innocent. And the singer too got support from his real fans, Check:

We do respect our PM but its just an entertaining video so don’t miss watching it. Just LOL!