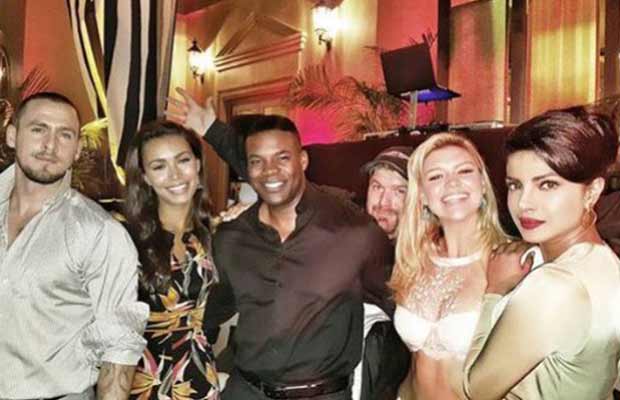 [tps_footer]Priyanka Chopra has become synonymous with massive success ever since she commanded the attention of the whole world’s audiences with her Hollywood stint. With her show ‘Quantico’, she became a much-loved name and face in the USA and her fans are present all over the globe. Be it for her ‘Jimmy Fallon’ appearance or even her ‘Oscar Awards’ gig, she has been making headlines for all the right reasons.

After she wrapped up shooting for the ‘Quantico’ series, the ‘Dostana’ girl has also completed the shoots for her Hollywood debut flick ‘Baywatch’. The film is based on the ‘Baywatch’ television series which were a runaway success and will see Chopra take on the role of Victoria who is the villain of the film. The film which also stars ‘High School Musical’ star Zac Efron and Dwayne ‘The Rock’ Johnson has been completed except for a few shots not involving Chopra.

Since a majority of the filming process has been completed, the full team of the film was seen letting loose and after the last day of filming, they headed to a very happening after party. Accompanied by Kelly Rohrbach, Alexandra Daddario and Ilfenesh Hadera as well as Seth Gordon, PeeCee was seen having a great time at the party. The ‘Anjaana Anjaani’ star also danced the night away and sizzled on the dance floor.

While the whole team was present, Johnson had to give the party a miss as he was busy shooting for ‘Neighbours 2’ and even Zac Efron was busy shooting. Chopra is slated to be back in Mumbai for a short break and to complete Bollywood projects before going back for ‘Quantico’ shoots in New York.[/tps_footer]