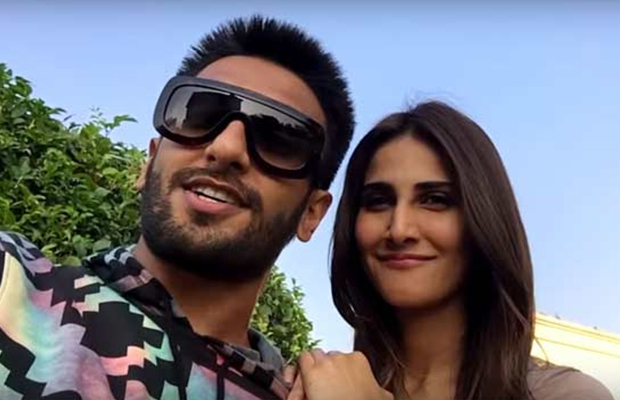 [tps_footer]Spontaneous actor Ranveer Singh is back in the city. The star was missing from Mumbai since a long time. Ranveer has finally arrived from Spain after a long while. Well, even though the super actor was absent from the industry the buzz about his marriage did not fail to make rounds. Ranveer is stealing all the headlines lately for his marriage with Deepika Padukone.

Other than his relationship status, Ranveer has shocked everyone with his kissing spree in the posters of ‘Befikre’. Ranveer will soon pair up with Vaani Kapoor in the film ‘Befikre’. The posters of the film have already made way for the masses. ‘Befikre’ is much in the limelight as it is said to be the boldest film of Yash Raj house.

As soon as Ranveer Singh landed and made his way to the exit he was bombarded with questions about his marriage. The actor who is always frank to the core replied saying, “Arre kya baat kar rahe ho yaar..subah subah neend bhi pura nahi huwa hai.”(What are you saying; I haven’t even completed my sleep.)

Well, the candid actor was just dodging the question! Talking about his kissing scenes in the film ‘Befikre’, the Bajirao Mastani actor stated, “kitna kiss karaya hai..bahut kissing scene hai.” (They have made me kiss a lot in the film, there are many kissing scenes.)

Well, the actor also confessed that his trip was superb and mind blowing. Ranveer Singh is garnering all the attention for his relationship with Deepika. The two have never shied away from flaunting their affection towards each other. There is a strong buzz that Ranveer and Deepika will get hitched next year!

On the work front, Ranveer Singh will be seen in the film ‘Befikre’. The actor is apparently also roped in for Sanjay Leela Bhansali’s next ‘Padmavati’ opposite Deepika.[/tps_footer]