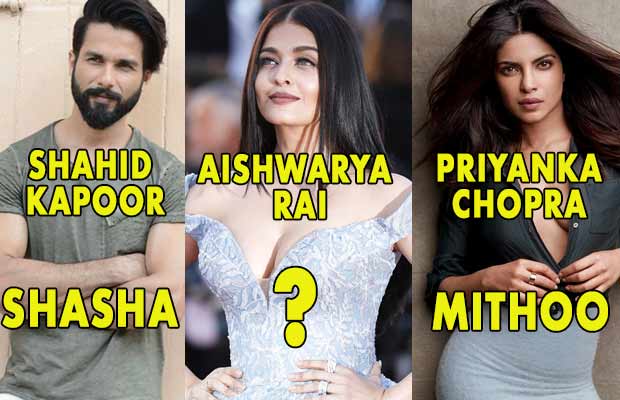 Our Bollywood celebs have got some of the unique nicknames!

All of us have some or the other special name for the ones we love. Similarly, our Bollywood celebs are also known by a different name in their friend and family circle. While some of the names are given by the media, there are some others which are given by their closed ones.

There are some really funny ones, some are unique, while some others are very cute. So, here’s the list of 18 B-town celebs with their funny-cute-unique pet names:

Aishwarya Rai Bachchan: The Bollywood actress and the ever beautiful Aishwarya has got a very cute nickname. She is called Gullu by her close ones. It definitely doesn’t go with her personality. But we have to agree that it’s cute!

2.Ranbir Kapoor: The heartthrob of B-town is called Dabbu amongst his peers and ost of the family. But for her mom Neetu Kapoor, he is the complete man. Hence she calls him Raymond.

3.Kareena Kapoor Khan: This one is something that everyone knows. At least all the Kareena fans would know that she is called Bebo by her family. In fact, many a times even media refers to her as Bebo.

4.Shah Rukh Khan: When most of the people and media calls him King Khan or SRK, his friends and peers call him Lucky Ali. And this name is given to him by none other than the actress Juhi Chawla.

5.Hrithik Roshan: As handsome as the man is, his pet name is as cute. This is also known to most of the people that the industry calls Hrithik Roshan as Duggu.

6.Kangana Ranaut: Kangana is now called as the ‘Queen’ of Bollywood after her popular film. But her family calls her Arshad, which means ‘devotion’. The pet name is manly, but the meaning suits her personality.

7. Priyanka Chopra: Media calls her Piggy Chops. But the international icon is called Mithoo at home, as she used to mimic people a lot. Some of her family members also call her Mimi, inspired from the French beauty Mimi Rogers.

8.Parineeti Chopra: PeeCee’s cousin Parineeti is also called Pari by many people. As it is a shortened version of her official name. But she also has another cute pet name, Tisha which is used by her family.

9.Karan Johar: The Bollywood director – producer is mostly referred to as KJo by the media.  But at home, everyone calls him Kattu Battu. And it was admitted by him only on a show.

10.Alia Bhatt: KJo’s student Alia now looks like a diva. But there was a time when she was a really chubby girl. This and the fact that she loves potato is responsible for her cute pet name Aalu.

11.Akshay Kumar: Media also calls him Khiladi Kumar. But his friends and family call him Raju, which comes from his real name. Akshay changed his name after coming in the film industry. His real name is Rajiv Bhatia.

12.Twinkle Khanna: Khiladi Kumar’s wife, a former actress and now a renowned writer Twinkle Khanna is popular for her witty words. That’s why people call her Mrs Funnybones. But her family calls her Tina.

13.Shahid Kapoor: The actor’s pet name is inspired from his official name only. The Padmavati actor is lovingly called Shasha by people.

14.Bipasha Basu: Now married to Karan Singh Grover, Bipasha looks a hot diva. But in her childhood she was a very cute girl. And that is why her parents used to call her Bonny.

15.Govinda: The actor’s mom named him Chi Chi, and now it is used by everyone. It actually means the little finger, which is known as the symbol of ‘strength’.

16.Sonam Kapoor: She is the fashionista of Bollywood and people love her dressing style. All thanks to her tall personality, the pretty girl is teased by her father Anil Kapoor, who calls him Giraffe.

17.Shraddha Kapoor: Shraddha is one pretty girl. But she has got the most funniest pet name, which is given to her by the actor and childhood friend Varun Dhawan. He calls her Chirkut, and now the name is used by her entire family.

18.Varun Dhawan: While Varun gave such a funny nick name to Shraddha, he himself has got a very funny yet cute one. His friends and family call him Pappu.