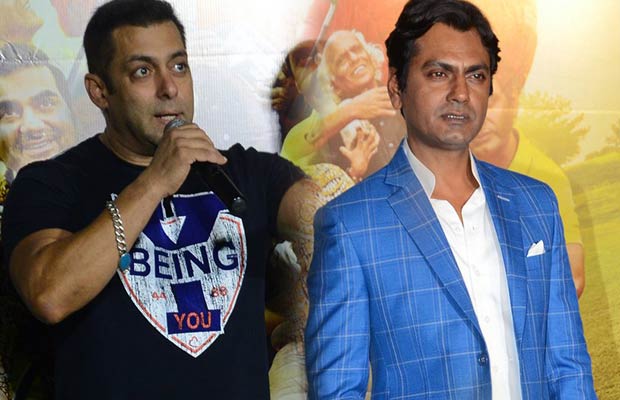 Yesterday, Salman Khan launched the trailer of his brother Sohail Khan’s directorial Freaky Ali. It stars Nawazuddin Siddiqui, Amy Jackson, and Arbaaz Khan in the lead roles. Freaky Ali is about a poor man mastering rich man’s game- Golf. Well, Nawaz had already worked with Salman in Kick and Bajrangi Bhaijaan. However, this is Nawaz’s first film with Sohail.

Salman spoke about many things at the trailer launch. He also opened up on Nawazuddin Siddiqui working with Shah Rukh Khan. He said, “Waha (Raees with Shah Rukh Khan) pe bhi waisa hi relationship hoga jaisa mere sath hoga. Aajkal mai Nawaz hu aur ye Salman hai.” Well, this shows Salman is happy that the Majhi actor is having a good bond with SRK. Also, Salman and SRK are also giving us friendship goals. In Raees, Nawazuddin Siddiqui will be portraying a police officer’s role. Nawaz had once said that he really enjoyed working with King Khan.

Freaky Ali will release on September 9, 2016. The film is about a middle-class conquering Golf; a sport considered to be elite man’s game. Also, Nawaz is hilarious in the trailer. He looks really freaky and in a never seen avatar before. His last release Raman Raghav received many acclaims for his performance. Well, it would be interesting to see him playing such a different role now. Freaky Ali will clash with Katrina Kaif and Sidharth Malhotra’s Baar Baar Dekho. Well, this will be another interesting clash as this year many big films are pitted against each other.