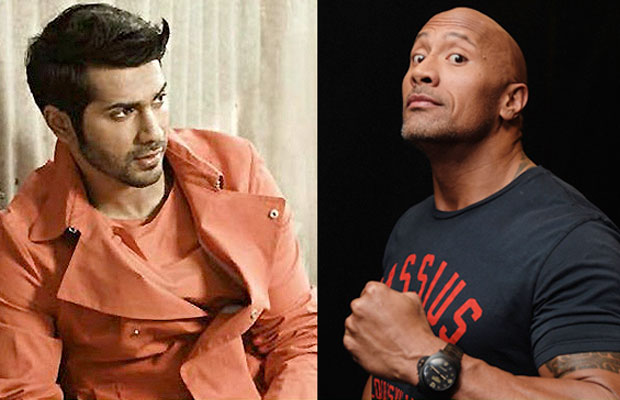 Varun Dhawan was last seen in ‘Dilwale’ and he is now gearing up for upcoming release,’Dishoom.’ Dishoom has Jacqueline Fernandez, Varun Dhawan, and John Abraham in the lead. The film is all set to release on July 29th, 2016. The film will be definitely be one of the most loved action-comic films of the year.

Varun Dhawan is a busy man nowadays and is leaving no stone unturned to promote his film. Recently, from Eros Now’s Periscope, a video of Varun Dhawan impersonating his idol, wrestler Dwayne ‘The Rock‘ Johnson has surfaced. Varun was seen enacting the Rock’s catchphrases to promote his movie. Jacqueline Fernandez is also seen in the video cheering him on.

Varun is looking fantastic in that video and the video has now got viral. And it was seen by none another than The Rock himself who tweeted: “Great Rock promo impersonation by my bud and Bollywood star @Varun_dvn!” Varun was delighted after looking at this response from his idol that he tweeted: “Can I take part in #RockThePromo? Dj. I might make it as a cruiserweight @TheRock”

These tweets are really cute and we can definitely some friendship brewing between these two stars.