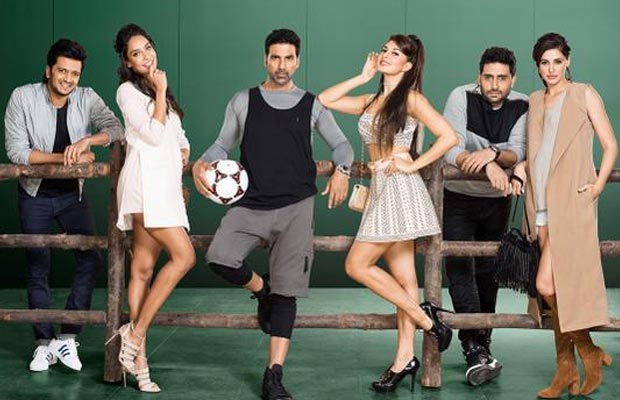 The Housefull franchise is all set to entertain the audiences once again with the third installment of the franchise Housefull 3 starring Akshay Kumar, Abhishek Bachchan, Riteish Deshmukh, Jacqueline Fernandez, Lisa Haydon and Nargis Fakhri in the lead roles.

With the actors Akshay Kumar, Abhishek Bachchan, Riteish Deshmukh in the classy and sporty avatar in the first look, actresses Jacqueline Fernandez, Lisa Haydon and Nargis Fakhri turn up the heat. The makers of the film have not revealed much about the plot, but it seems it is surely going to be interesting and big than the earlier one’s. With the guesses, it seems Akshay Kumar might be a football/sports lover as he is holding a football in the first look.

Well, Riteish and Akshay Kumar were already part of Housefull prequel; Abhishek Bachchan is the new edition to the family. With hot ladies in the house along with the comic studs, ‘Housefull 3′ is surely going to be fun ride for the audiences once again and moreover anything audiences should be thankful that this time the film is not being directed by Sajid Khan.

The film is being directed by duo Sajid-Farhad and is produced by Sajid Nadiadwala, The laughter-riot film ‘Housefull 3′ is slated to release next year.