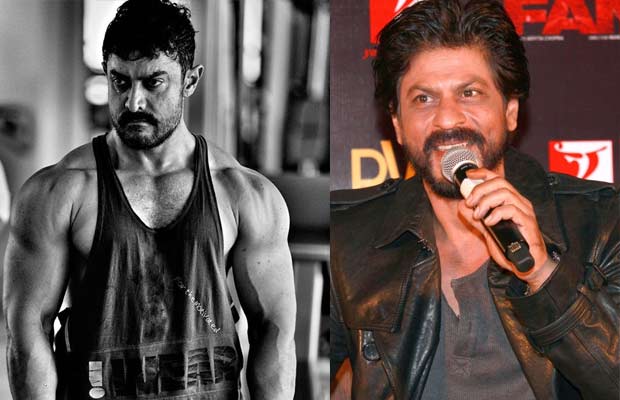 After a number of celebrities, superstar Shah Rukh Khan made his appearance yesterday on live video streaming and broadcasting destination #fame.

King Khan spoke about a number of things including his workout sessions, fitness rituals, and food consumption habits. He also showed around the gym which he uses for working out and also spoke about how a particular picture of Hrithik Roshan gives the Baadshah gymming goals.

However, SRK revealed a very amusing fact on the live streaming. He said that although he loves sweating out in the gym, he can still never be as disciplined about his workout rituals as his contemporary star Aamir Khan.

Mentioning the Mr. Perfectionist, who has received tremendous appreciation from fitness freaks in the country who gained and lost a lot of pounds for his upcoming movie Dangal, SRK said that Aamir is really very hard working in the gym.

“Aamir is very disciplined and works really hard on his body. Two years ago, when I had met him, he had put on a lot of weight and now he has lost all those extra kilos. I can never be disciplined.”

Speaking to the video starring destination, he said, “In fact, I started working out only after ‘Om Shanti Om‘.”

SRK had gathered a huge fan following after his shirtless appearance in Om Shanti Om for the song Dard-e-disco. However, when SRK was working out for his 6 pack abs, Aamir was ready with his 8 packs for Ghajini.