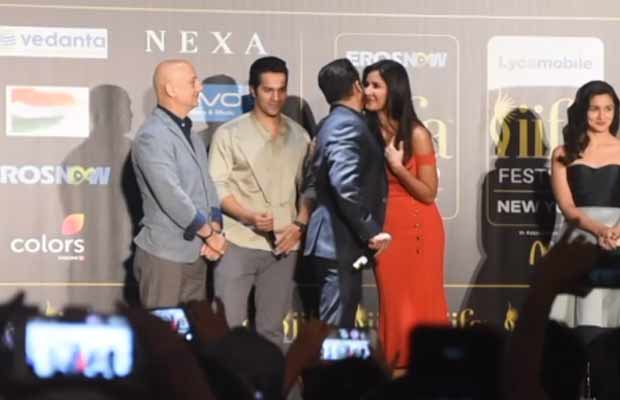 Who’s who of Bollywood has reached New York for IIFA 2017 awards. From Salman Khan to Katrina Kaif, Alia Bhatt, Varun Dhawan, and many others are currently having a gala time together in New York like never before. The first press conference of the gala event took place yesterday in the presence of all Bollywood celebrities. Salman Khan, Katrina Kaif, Anupam Kher, Varun Dhawan, Kriti Sanon, Sushant Singh Rajput and others took the stage at the IIFA press meet yesterday.

The actor took the mic and said that currently he can remember only one date and that is Katrina Kaif’s birthday. He then gets media sing birthday song for her. The moment arrived when he personally went to Katrina, hugged and kissed her leaving everyone cheer and hoot for them.

Well, IIFA 2017 is making the right noise, thanks to Salman Khan’s gesture towards ex-girlfriend Katrina Kaif. The two are all set to romance onscreen as well in their next ‘Tiger Zinda Hai’, being directed by Ali Abbas Zafar. The film releases this year in December.